Governor Lamont: Flags Lowered To Half-Staff In Remembrance of the Victims of the Mass Shooting In Indianapolis 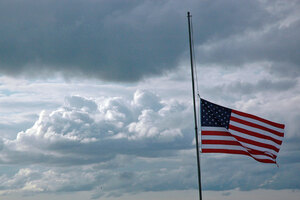 Governor Ned Lamont today announced that – in accordance with a proclamation from President Joseph R. Biden, Jr. directing flags to be lowered throughout the country as a mark of solemn respect for the victims of the mass shooting last night in Indianapolis, Indiana – he is directing U.S. and state flags in Connecticut to fly at half-staff beginning immediately until sunset on Tuesday, April 20, 2021.