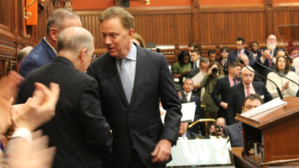 Governor Ned Lamont today held a news conference in Waterbury to announce the first in a series of proposals he will introduce during the 2023 legislative session that are aimed at building on Connecticut’s efforts to eliminate gun violence. They include:

The proposals will be included as part of the governor’s package of priorities for the 2023 legislative session that he will present to the Connecticut General Assembly in February. They are among the first set of proposals on gun violence that the governor has introduced so far this year, and additional proposals on this subject will be announced in the coming days.

“National statistics show that Connecticut remains one of the safest states in the country and violent crime has been decreasing here over the last several years, but even one shooting is one too many,” Governor Lamont said. “It’s our responsibility to implement policies that keep our homes and our neighborhoods safe, and we have to take every opportunity to keep our residents protected. These commonsense reforms will protect our neighborhoods and the people who live in them.”

“I have seen the success of our state-supported community violence intervention programs up close and personal,” State Senator Gary Winfield, co-chair of the Judiciary Committee, said. “They are critical to addressing and preventing gun violence in our communities, where strict gun laws fail to stop gun-related crime. We have the ability to address the root causes of gun violence and get to the individuals at risk of committing these offenses.”

“The Judiciary Committee plans to focus on addressing community gun violence this session, and so I’m glad the governor is submitting this proposal,” State Representative Steven Stafstrom, co-chair of the Judiciary Committee, said. “These critical reforms attack gun violence in our neighborhoods from every angle. I’ve supported some of these proposals in the past, and I look forward to working with the committee and the governor to get a commonsense gun violence package accomplished this session.”

The fiscal year 2023 budget adjustment bill that Governor Lamont signed into law in May of 2022 includes an allocation of $2.9 million for a new statewide community gun violence intervention and prevention program that is being overseen by the Connecticut Department of Public Health’s Office of Injury and Violence Prevention with input from the newly established Commission on Community Gun Violence Intervention and Prevention. The office is utilizing those funds to distribute grants to community-based violence intervention organizations – many of which are expected to be in urban communities – that seek to stop cycles of violence through community-based, hospital-based, and law enforcement-led strategies.

This year, Governor Lamont’s fiscal years 2024 and 2025 budget proposal will include an additional $2.5 million to provide more grants for these organizations and allow them to continue their community-based crime reduction efforts. It will also continue funding for the staff at the Department of Public Health who oversee this program.

“This program is bringing together communities, hospitals, and law enforcement to stop the cycle of gun violence through diverse partnerships and a rigorous evaluation of proven strategies that prevent violent crime,” Governor Lamont said.

Aligning carry laws with the expectations of Connecticut residents

Many Connecticut residents are surprised when they learn that openly carrying firearms on the street, in stores and restaurants, and in other public and private locations is legal under state law for individuals who have a permit. Governor Lamont is proposing to generally ban the open carrying of firearms in public, except for a list of enumerated exceptions, and prohibit any carrying of firearms in bars. This change will help prevent the intimidation of residents at certain locations such as protests and polling places, and allow law enforcement to more effectively address community gun violence.

Preventing the bulk purchasing of handguns to discourage straw purchases

Connecticut state laws currently do not include any limitations regarding the quantity of firearms consumers can purchase within specific periods of time. This makes it easier for criminals to purchase firearms in bulk with the intention of illegally selling them on the underground market, where many guns used in crimes are obtained. To discourage the illegal straw purchasing of guns, Governor Lamont is proposing to limit the number of handguns that an individual can purchase to one per month. This proposal is limited to handguns and does not impact rifles used for hunting or any other long guns.

“Many guns involved in crimes occurring in our communities are purchased illegally on the underground market, and deterring this kind of straw purchasing will have a major impact on lowering crime,” Governor Lamont said. “I think a lot of people are surprised when they learn that you can buy an unlimited number of handguns within a very short period of time.”

In 2019, Governor Lamont signed into law legislation banning untraceable “ghost guns” unless the owner obtains and engraves the weapon with a serial number that is registered with the state. That law, however, only applies to those “ghost guns” that are assembled after the legislation went into effect, and grandfathers in all of those that were assembled prior to its enactment.

This year, Governor Lamont is proposing that this law be updated to eliminate this exemption and require all “ghost guns” – including those that were assembled prior to the enactment of this law in 2019 – to be registered with the state. Eliminating this exemption will better enable law enforcement to administer this ban. This proposal is similar to the state law that was enacted in 2013 requiring all large-capacity magazines to be registered with the state, including those obtained prior to its enactment.

These proposals build on the Lamont administration’s record of support for improving gun safety in Connecticut, including:

Additionally, Governor Lamont has released more than $32 million in state funding to support statewide gun violence prevention efforts. Among those investments are: