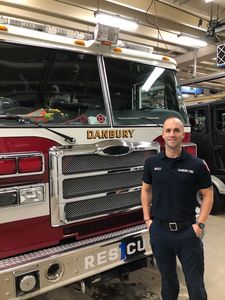 Last night, while driving on the Saw Mill Parkway reporting for duty on his night shift at Danbury Fire Headquarters, Firefighter Jeff Nolet happened upon a single-vehicle motor vehicle accident.

Firefighter Nolet noticed a gathering of cars and people on the shoulder of the roadway and stopped to offer assistance. The bystanders informed him that there was a car over the embankment with someone still in the vehicle. Firefighter Nolet was easily identifiable as a City of Danbury Firefighter as he was already in his work uniform at the time. He conversed with the bystanders and ensured someone had called 911. He then proceeded down the embankment to the vehicle which was on its side in a small stream. The engine was still running and the wheels were still turning.

Without hesitation, Firefighter Nolet entered the calf-deep cold muddy water and made contact with the male driver confirming he was the lone occupant in the vehicle. He instructed the driver to shut of the ignition and was able to open the door of the vehicle to gain direct access to the driver. This allowed him to conduct a primary survey of the driver who was not trapped, but reported his shoulder hurt. Firefighter Nolet assisted the driver up and out of the vehicle onto the side of the car. Firefighter Nolet managed to lift the patient onto his shoulder and carried him away from the vehicle while negotiating the mud and water. A bystander provided additional assistance carrying the confused patient up the embankment to a safe area on the side of the road.

Firefighter Nolet is a member of B Shift which is led by DC William Lounsbury who recently was mentioned for his efforts in assisting a passenger on his flight having a medical emergency.