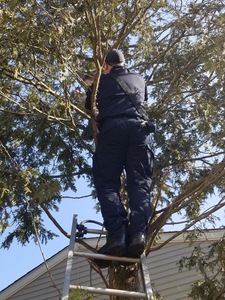 "Sometimes firefighters are called to rescue cats in trees, and sometimes it's something different!" Danbury Fire Department said.

Danbury Fire Department announced on their Facebook page that yesterday, Monday, March 2, Engine 23 was called to rescue a four-year-old boy who climbed 16 feet up a tree. When he was unable to get down, his mom called 911 and Engine 23 came to the rescue!

"The young lad was no worse for the wear, and we suspect he'll be a Danbury Firefighter one day!" team Engine 23 says.