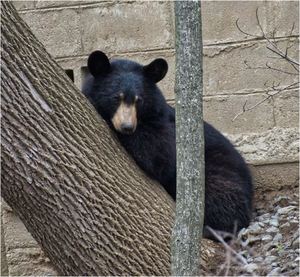 Yesterday was a bear of a day for Danbury Fire Department. They explain, "While doing our morning station cleaning and equipment checks one of our firefighters spotted a bear in the lot behind our fire station. Of course, none of us believed him until we saw it for ourselves!"

According to Fire Department members, the bear, later named by Mayor Mark Boughton as "Dan Berry", decided he liked it back there and didn't have any plans to leave. "For the bear's safety along with our residents in the area, we requested Connecticut State Environmental Conservation Police who sent us a team to assist in relocating "Dan Berry" to a better home," they say.

Danbury Fire Department said on their Facebook Page that the biologist from DEEP estimated he was approximately 15 months old; called a “yearling.” He weighed about 135 lbs. and appeared to be in good health. While they had him sedated, they tagged and chipped him as well as recorded his measurements. He was relocated to another location in the state and safely released back into the Wild by Connecticut Department of Energy & Environmental Protection (DEEP).