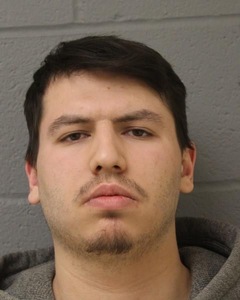 Newtown Police received a report and investigated a complaint of an armed robbery that occurred at a residence on Meadow Brook Rd. back in October of 2018.

"This was a very extensive, years long, investigation on what would be best described as a planned robbery, drug deal, gone bad" Lt.  Aaron Bahamonde.  "The victim was struck in the head with the butt of a gun during the robbery, the victim was not seriously injured". "This investigation involved multiple search warrants of phone records and other physical evidence records. Police are very confident that all the suspects involved have been identified and will soon all be arrested"

Three suspects were identified during the investigation and warrants were secured for all three. One of the suspects was a juvenile and the other suspect who has yet to be charged is currently being held in a NY State Correctional Facility on other gun related and drug charges.

Buckner was charged with Home Invasion , Robbery 1st Degree, Larceny 6th and Conspiracy to Commit Home Invasion. Buckner is being held at a $250,000.00 bond and will be taken to Waterbury Superior Court on 04/27/2020.