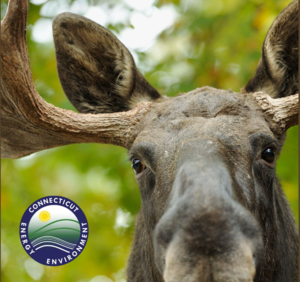 Recent sightings of moose in Woodbury, Southbury, Danbury, Newtown, and New Fairfield, though believed to be the same moose, serve as an important reminder for motorists to be aware that increased moose activity near roadways can pose a hazard. Though Connecticut’s moose population is small (about 100 individuals), moose can pose a serious threat to public safety when they wander onto roadways. Moose are more active and often travel farther distances during the fall breeding season, which peaks in September through October.

DEEP urges motorists to be aware during these seasonal periods of activity and slow down and drive defensively should a large animal, such as a moose, be spotted on or by the road. Because moose are darker in color, stand much higher than deer, and are most active at dusk and at night, observing reflective eye-shine from headlights is infrequent and, when struck, moose often end up impacting a vehicle windshield. When checking the road for moose at night, look higher than you normally would for deer and reduce the speed of your vehicle.Data collected from other states indicate that a moose/car collision is 30 times more likely to result in a human death than a deer/car collision. On average, one out of 50 moose/car collisions results in a human fatality.

Although usually wary of people, moose can feel threatened and become aggressive. They also may demonstrate unpredictable behavior if they wander into populated areas. Under no circumstances should moose be approached. Although moose may appear to be docile, they should be given the healthy respect that New England’s largest land mammal warrants.

All moose, deer, and bear collisions with vehicles should be reported to local, state, or DEEP Environmental Conservation Police Officers. DEEP’s 24-hour Dispatch Center can be reached at 860-424-3333. Please report any moose sightings to the DEEP Wildlife Division. The link can be found on the DEEP website.

DEEP’s primary concern regarding moose is public safety.DEEP's Wildlife and Environmental Conservation Police Divisions are monitoring any moose that travel near busy highways and will evaluate potential threats presented by the moose with local safety officials.

More information is on the DEEP website here: Moose (ct.gov