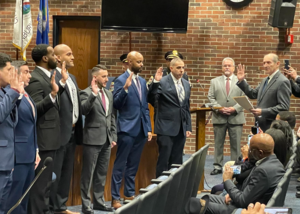 “These talented and qualified officers bring a broad range of valuable skills and diverse experience to the Danbury Police Department. They will be tremendous assets to the Department and to the Citizens of Danbury. We are proud and honored to welcome them to our City, and look forward to recruiting and hiring more qualified police officers to help to continue to keep Danbury safe,” said Mayor Dean Esposito.

“We are very excited to have these new additions to our department. They already have experience working in larger, diverse environments. As such, I believe that they will fit in well with our current officers and supervisors and be able to effectively serve our great community. We welcome them with open arms and wish them a long and successful career here in the Danbury Police Department,” said Danbury Police Chief Patrick Ridenhour.

Officer Justin Revan served as Police Officer with NYPD for two years and previously worked in retail for over 10 years.

Officer Terrence Lott served as a Police Officer with the City of Waterbury for four years where he also worked with the Police Athletic League (PAL).

Officer Abo Niang served as a Police Officer with NYPD for two years.

Officer Justin Orlanski served as a Police Officer with New Orleans, Louisiana Police for six years, before that, he served as an EMT in New York.