Stand up comedy on December 13 at Sugar Hollow Taproom! 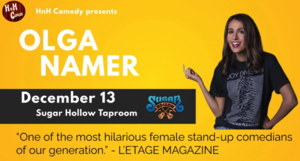 Brought to the stage HnH Comedy, the brainchild of Ridgefield Resident, Danny Livingston, and his partner from South Salem, NY, Carmen Delessio, Tuesday's show will include Connecticut comics Chris Warren and Courtney Davis who will be joined by host Gilbert Hernandez and headliner Olga Namer (check her out by clicking the arrow in the image).

Purchase tickets online HERE ($10) or at the door.

The story behind HnH Comedy

Danny and Carmen's contacts at Manhattan clubs led them to the formula of putting together a top club headliner with area talent.

Danny Livingston has been performing standup in Manhattan's Comic Strip Live for several years. Carmen came out to support him and decided to give comedy a try.  After several successful shows, they looked for an opportunity to bring comedy to the area.

Carmen said, "Danny talks to everyone. He was having dinner at the Red Rooster in Ridgefield and struck up a conversation with John Conner of the Sugar Hollow Taproom."

That conversation eventually led to the comedy shows at Sugar Hollow.

Carmen says that the audience is building and that a recent open mic night was a destination for comics who came from as far away as Middletown, NY.  Middletown is ninety minutes away.  Carmen added that comics will travel for an opportunity to perform in front of an engaged audience and that the lighting and sound systems at Sugar Hollow make it an incredible venue.

Purchase tickets to Tuesday's show for $10 online or at the door.