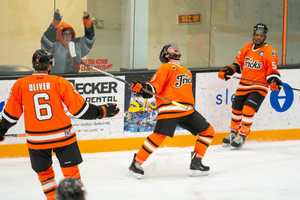 Kelley stops 35, Ruiz with the GWG

There was no love lost on Valentine's Day at Danbury Arena, as the Hat Tricks took down the Delaware Thunder by a 4-2 score. Carter Shinkaruk opened the scoring with a breakaway goal, collecting a Shayne Morrissey breakout pass and streaking past a defender. His shot snuck through the five-hole of Aaron Taylor, giving Danbury a 1-0 lead that would hold through the end of the first period.

Shayne Morrissey found the back of the net with a shot from the blueline on the powerplay, giving the Hat Tricks a 2-0 lead. Brennan Young would get the Thunder on the board before period's end, capitalizing on a breakaway beating Dillon Kelley blocker-side.
In the third period, after generating several offensive chances, Taylor Cutting finally broke through the Hat Tricks' defense, evening up the score with a slick goal from the slot. The tie score would last just 10 seconds, though, as off the ensuing face-off, Jonny Ruiz barreled into the attacking zone, roofing a wrist shot over Thunder netminder Aaron Taylor.
Nicola Levesque would tack on an empty-net goal in the final seconds of regulation to seal the 4-2 victory. Dillon Kelley would finish with 35 saves.
"They're a team that relies on their physicality, and you saw that tonight," said Hat Tricks head coach Billy McCreary. "We focus on ourselves, playing the game the right way with passion and energy. We were fortunate to come out with the three points tonight."
The Hat Tricks and Thunder will complete their weekend set Saturday night at Danbury Arena for Military Appreciation Night. Tickets are available by clicking here.