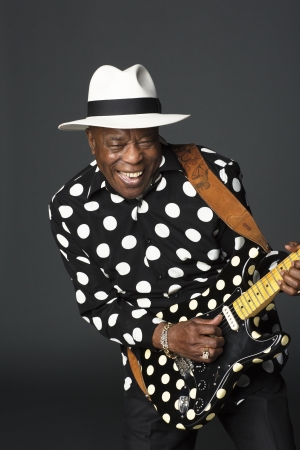 He’s the last of the living blues legends.  Six-time Grammy Award winner Buddy Guy blends the genres of blues and rock and roll like no other performer has. His live concerts are legendary, they transcend the blues and become theater.  With his latest album “Born To Play Guitar” Buddy Guy has stayed at the top of Billboard’s Top Blues Album charts since it was released on July 31.

Touring with Buddy Guy is Grammy Award winning producer/songwriter Tom Hambridge – producer of “Born To Play Guitar”.  The Blues Top 10 songs written, cowritten by and produced by Hambridge include: Born To Play Guitar, Flesh & Bone (Dedicated to B.B. King) with Van Morrison; Whiskey, Beer & Wine, (Baby) You Got What It Takes featuring Joss Stone] and Wear You Out featuring ZZTop’s Billy Gibbons). Make it a great night out with dinner at Southwest Café (109 Danbury Road, Ridgefield) before the show and receive a free Margarita with your entrée when tickets are presented.  Media partner for this event is 90.7fm WFUV.