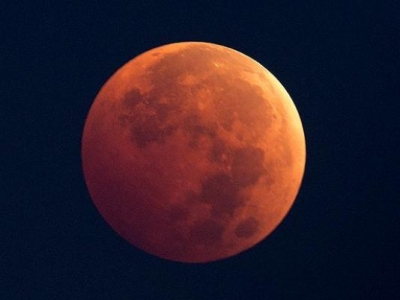 The Supermoon Lunar Eclipse is coming. And yes, it’ll also change color.  The earth doesn't totally shade the moon. Some sunlight trickles around the edges of the planet and gets filtered through the atmosphere, which only lets through light with longer wavelengths. That’s red. This eclipse also happens to coincide with the harvest moon, the full moon that falls closest to the autumnal equinox.

Taken together, all these astronomical events should make for a pretty special show—and a rare one. The last supermoon eclipse was in 1982, and it won’t happen again until 2033.

The moon will start darkening at 8:11 p.m. Eastern time, and it will start to pass through the Earth’s dark umbral shadow at 9:07 p.m.. It’ll be completely shaded for about an hour starting around 10 p.m. (the last total eclipse, on April 4, lasted for a mere five minutes).