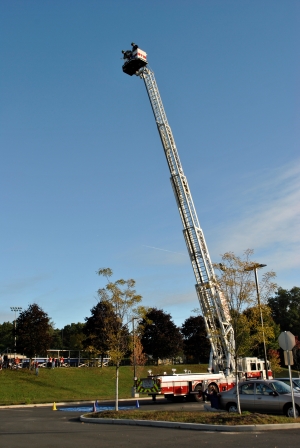 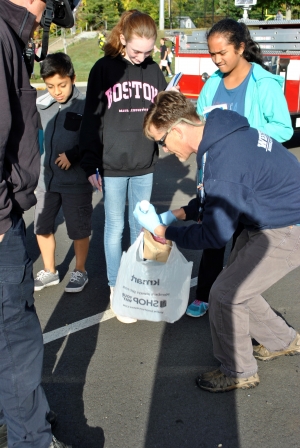 One hundred students in the Science, Technology, Engineering and Mathematics (STEM) program at Westside Middle School Academy watched with anticipation as a firefighter teetered atop the 97-foot-high ladder of a firetruck. Then one by one, he dropped eggs encased in pods the students created in an engineering design project to see if they would survive the fall.

Eighteen of the 25 eggs survived the drop, up from 13 in last year’s trial.

WSMSA teacher Jon Neuhausel said part of the project resembles a scene from the Sandra Bullock film “Gravity,” wherein Bullock escapes from the International Space Station. The 100 seventh-grade students were required not only to protect their eggs, but to create escape pods.

“In the STEM program, we try to bring engineering to life,” Neuhausel said. “We work hard to get students excited about the engineering design process through hands-on, community-based projects.”

Seventh-grader Collin McGraw was very excited as he waited for the firetruck to arrive at his school in the early morning of Oct. 6. He said that the egg-dropping wasn’t just about excitement, it was about learning to problem solve and redesign.

“We had to engineer something that would safely bring an egg to the ground,” Collin said. He said conducting the initial experiment using a 35-foot drop helped them understand what they would need to do to improve their designs for an even greater drop.

“Not many people know how to take random materials and make them protect an egg from breaking,” said his teammate Chayne Howard.

It took two hours for the Danbury Fire Department to drop all of the eggs, which were hoisted up the ladder using a pulley system and a bucket.

The project engaged the students in brainstorming, planning, building and testing their design and redesigning and retesting. The redesign portion required students to make their egg pods weigh 10 percent less, to make it more of a challenge, Neuhausel said. And the students had to consider their constraints, whether they be time, supply and/or weight.