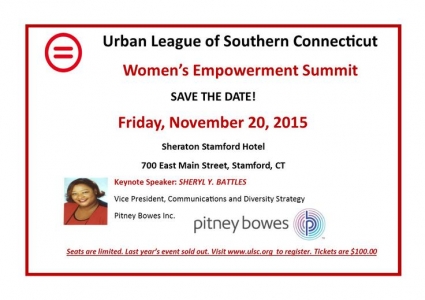 Danbury resident Karen Wright has been honored by the Urban League of Southern Connecticut with the Woman of Power Award.

Wright will be among 11 women recognized as role models and “notable woman of power and distinction” committed to diversity and inclusion. These are values she learned as a young child watching her family on the front lines of the civil rights movement.

Since 2011, Wright has been the Director of Development at New York University, providing leadership and strategy to secure major gift support to the Silver School of Social Work; The McSilver Institute for Poverty, Policy and Research; The Center for Latino Adolescent and Family Health; The Center on Violence and Recovery; and The Institute for Social Development, a partnership with East China Normal University School of Social Development in Shanghai.

“For more than four years, Karen has worked tirelessly and successfully to raise philanthropic funding for the Silver School of Social Work's prestigious research and educational programs, and for scholarships to enable students, regardless of their financial background, to attend our outstanding programs,” said Dean Lynn Videka, NYU Silver School of Social Work. ”I speak for the entire NYU Silver School community when I congratulate Karen on being named a Woman of Power by the Urban League of Southern Connecticut.”

Wright has overseen efforts to raise more than $10 million for these NYU institutions, with an additional $30 million raised for research, evaluation and training. In 2015, Wright is on track to surpass her fundraising goals by 242 percent, increasing much-needed scholarship support for students.

While interim Director of Development at Western Connecticut State University, Wright cultivated and secured support for the Macricostas School of Arts and Sciences program called “Building a Bridge to Student Success,” as well as the Ancell School of Business Financial Literacy Institute, and several multi-year scholarships.

Wright has served with many organizations focused on providing opportunities to youth and women. From 2007 to 2009, Wright served as Vice President of Youth Development at the Urban League of Southern Connecticut. She is a member of the Association of Fundraising Professionals, Women in Development, and Delta Sigma Theta Sorority. She graduated from Fisk University with a degree in Psychology and is an MSW candidate at NYU.

Wright and her husband, Eric, have a son, Justin, who recently graduated from Rollins College.

The Women’s Empowerment Summit on Friday, November 20, 2015 will host 400 women, some whom are struggling with long-term unemployment or are returning veterans, with educational workshops, panel discussions, and networking opportunities.