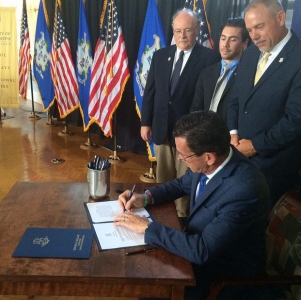 “We have one of the most educated workforces in America – and we need to keep it that way. As we deliver record high graduation rates in our high schools, we need to ensure that residents have access to affordable higher education. It’s central to growing our middle class. College should not – and cannot – be out of reach for Americans,” Governor Malloy said.  “Student loans and the high student debt carried by the average American threatens to be the next major debt crisis in the United States.  We are taking action to fight that trend.”

Connecticut Department of Banking Commissioner Jorge Perez said, “I thank Governor Malloy and the co-chairs of the legislature’s Banking Committee for their continued and strong investment in Connecticut students – an investment that will pay meaningful dividends in the lives of so many.  Helping students keep their focus on learning is what this legislation is all about.”

“With the signing of this bill, managing the costs of attending college just got a bit easier.  CHESLA now is able to offer students the ability to refinance their loans and just announced new loans at a record-low rate of 4.95 percent, made possible by last year’s combination of the Connecticut Student Loan Foundation with CHESLA.  These two organizations share a mission of ensuring access to higher education, and as the foundation’s past board chair, I believed it made perfect sense to use the foundation’s available assets to benefit our Connecticut college students,” State Treasurer Denise L. Nappier said.  “September is College Savings Month, a good time to recognize that the strength of Connecticut’s economy depends on a well-educated and financially literate workforce.  As a state, we must do our part to pave the path for success of the next generation as they gear up to compete in a global economy.”

“I am so proud that Connecticut is leading the way for college affordability by becoming the first state in the nation to create a Student Loan Bill of Rights,” House Majority Leader Joe Aresimowicz (D-Berlin, Southington) said.  “Sixty-four percent of college graduates in our state have student loan debt, which is why it is so important that we continue to take measures to make college more affordable for students and their families.”

“This is truly groundbreaking legislation.  The shackles of student debt prevent graduates from starting businesses, buying homes, even starting families.  I am grateful to Governor Malloy for his support and proud that Connecticut is leading the nation-the first state to pass a Student Loan Bill of Rights,” State Representative Matt Lesser (D-Middletown), co-chair of the General Assembly’s Banking Committee, said.