Forever Grateful (Dead) at the Ives on July 3 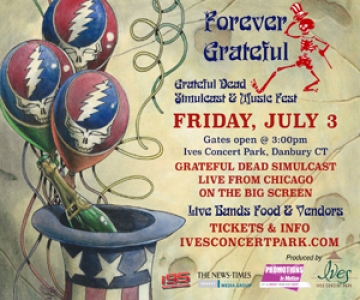 Local fans can have a front row seat.   Forever Grateful is a music festival that will include a simulcast of Friday's Grateful Dead concert from Chicago.  The festival will be held at Ives Concert Park, 43 Lake Avenue Extension, Danbury on Friday, July 3 with gates opening at 3pm.

As a long-time fan of the Grateful Dead, Cathy Moore, Owner of Promotions In Motion, a special events marketing and production company in Danbury, easily saw the vision for this event.  She titled it “Forever Grateful” and enthusiastically teamed up with Ives Concert Park to broadcast the 50th Anniversary simulcast from Chicago along with an outdoor music festival featuring live performances by Grateful Dead tribute bands throughout the afternoon/evening along with various exhibitors, food and beverages.

“We are excited to build this event with Ives Concert Park”, said Moore.  “If people have never seen the Grateful Dead perform this is their last opportunity to do so.”

Forever Grateful is planned to give those attending that true Dead show ambiance.  Prior to the main simulcast performance by the Grateful Dead projected on the jumbo screen at 8pm, live performances by Red Planet, Symphonic Bodega, Father Nelson and the Backsliders, Bobby Paltauf and Shakedown will entertain the crowd from 3pm until 8pm for dancin’ and jammin’ in true Grateful Dead style.

“Whether you're a Dead Head or just interested in experiencing the true vibe of a Dead show, put on your best tie-dye and come in celebration of the 50th Anniversary of the Grateful Dead and their last-ever performance together,” said Moore.  “It’s a part of rock & roll history in the making along with a night of music, dancing, food, vendors and people just having a good time.  There’s nothing to do but smile, smile, smile.”