Read about Pilobolus & watch them perform LIVE at The Ridgefield Playhouse on Friday night! 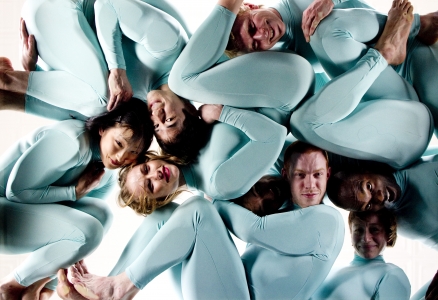 In 1971 a young dance instructor, Alison Becker Chase, began teaching a modern dance class at Dartmouth College in New Hampshire.  Rather than using traditional methods, Chase decided on an unorthodox approach by first introducing the class to “improvisation and choreography.”

Using this approach as a touchstone, several of the students began to experiment with movement or, “collective muscle,” as it was dubbed, integrating acrobatics and dance, carrying and lifting one another using intricate, gravity-defying body formations, with the dancers working as a collective unit, rather than as individual dancers.

Just six years after that first dance class, the now wildly popular Pilobolus Dance Company made their Broadway debut.  Anna Kisselgoff, reviewing the performance for the New York Times, described the group, “Pilobolus is a Mad Hatter’s tea party: Children of the 60’s and 70’s, they have created their own wonderland.  The marvelous part is that all of us enjoy ourselves at the party.”

Ever evolving and experimenting with new forms of movement, the company then took on the challenge of using a shadow or silhouette structure, attempting to evoke emotion without the use of facial expressions, a sort of visual language. The New York Times in describing this new staging said that it “casts a spell.” The success of this new format led to the creation of Shadowland, one of Pilobolus’ more popular programs.

In the years between 1977 and 2015, the group, now known as The Pilobolus Dance Theater, traveled throughout the United States and Europe winning numerous accolades and awards, including a 1997 Primetime Emmy Award for a televised performance at the Kennedy Center’s 25th anniversary, followed by appearances on high-profile TV shows, including a featured segment on 60 Minutes and on the 2007 Academy Awards show, as well as appearances on Oprah and Late Night with Conan O’Brien

Describing Pilobolus’ enormous universal appeal,  Renee Jaworksi, a former  Pilobolus dancer  and now one of the group’s  Artistic Directors, “Pilobolus is a dance company for people who don’t like or know dance; its more accessible than some other forms of dance and more playful than is common at a dance concert. We’re constantly trying new ways to express human conditions that allows people to connect with us.” Smiling, Jaworkski continues, “People have described Pilobolus as a combination of modern dance and Cirque du Soleil.”

One of the reasons for the great success of Pilobolus as a company is that the all the dancers, producers and technicians are encouraged to express their ideas and opinions – a true cooperative community; everyone joining in during rehearsals calling out suggestions, down to the smallest arm movement - the result is a finely-tuned machine.

In the last few years, Pilobolus has expanded to “create a community of collaboratives,” according to Jaworksi. Other artists are invited to join on a project-by-project basis: Steven Banks, the head writer of Sponge Bob Square Pants and puppeteer Basil Twist, a collaborator on the first of the Pilobolus’ shadow work, and more recently, a successful collaboration with magicians Penn and Teller.

Some 44 years after that first class at Dartmouth, the company has evolved into today’s breathtaking version of the Pilobolus Dance Theater, incorporating high-tech shadowing along with their now famous theater of dance.

A true Connecticut company, Pilobolus, has called Washington Depot, Connecticut its studio home for the last 30 years and all of Pilobolus’ participants live in this state.  As a close neighbor, The Ridgefield Playhouse has been the beneficiary of Pilobolus’ unique performances over the years. As Jowarski explained, “The Ridgefield Playhouse is close to home, we’re neighbors and we love to perform for the community that we actually live in.”

As Ksselgoff said some 40 years ago, “The marvelous part is that all of us can enjoy ourselves at the party.”

To join the Pilobolus party at the Ridgefield Playhouse, on September 25 at 7:30 PM, click here.