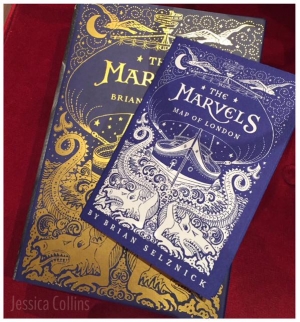 Earlier this year, my daughter came home from the library with a copy of “Wonderstruck” by Brian Selznick. She couldn’t put it down and only looked up to tell me, “Mom, you HAVE TO read this book. It’s amazing!” After she fell asleep, I snuck it off her nightstand and started reading, and she was right. It was amazing. As soon as I finished it, I picked up “The Invention of Hugo Cabret,” and it was just as amazing. In a matter of days, I was a huge fan of Selznick’s work and was thrilled to find out that book three in his trilogy would be released in September. We impatiently awaited the arrival of his new book, “The Marvels.”

You can imagine how excited I was to have the opportunity to sit down with Selznick and discuss books, writing, illustrating, and book making. The man behind “The Invention of Hugo Cabret,” “Wonderstruck,” and “The Marvels” is just as interesting as the books he writes. We jumped right in to his unique approach combining images and words to tell a story.  He described himself as a maker of books and explained, “I really do think of myself as someone who makes books and the way that I tell my stories is both words and pictures, and so I have a hard time separating the two.” Unlike most books, his images do not reiterate the words. Instead, Selznick uses images to tell parts of the story. He recounted enjoying the book “Fortunately” by Remy Charlip as a child. He shared, “I loved that every time you turned the page, it moved from something good that was in full color to something bad that was in black and white, and I really loved how the story progressed because you were turning the pages.”

His work is also inspired by Maurice Sendak, especially the wild rumpus in “Where the Wild Things Are.” Selznick explained, “By the time you get to the wild rumpus, there’s no more white space, and there are no more words.” The reader is an active participant in controlling the movement of the story forward. “You just move through those four drawings at your own pace,” he added. Selznick continues to draw inspiration from this as he shared, “Essentially all of the drawing sequences I have done since then have all been inspired by the wild rumpus.”

While the stories in “Hugo Cabret,” “Wonderstruck,” and “The Marvels” are unique to each book, the three together are a trilogy. Selznick explained, “I’ve been thinking about these three books as a trilogy as there are things that link them thematically.” As a reader, I find myself nervous when writers say this, as I want Selznick to continue telling stories through images and words. Fear not, he confirmed: “I’m sure that in some fashion, books that I do in the future will feel related, but right now it is hard to say. I can sort of picture books in the future being a kind of cousin to these books.”

As readers works through this trilogy, they find that first, to tell Hugo’s story, Selznick moves back and forth between images and words. In “Wonderstruck,” the reader discovers two stories at the same time, taking place 50 years apart—one through images, the other through words. Selznick continues to change how he uses images and words in “The Marvels.” The book opens with 400 pages of images to tell one story and follows with 200 pages of words to tell another story that takes place over 100 years later. When the two stories come together, Selznick uses images and words together. Readers may wonder how he continues to evolve his use of words and images. He shared, “Every time I make a book, what I try to do is take everything I learned from the previous book and do something new with it.” For a reader, it is exciting to open up each one of Selznick’s books and see how he is using images and words for each story.

I was curious to learn about his process. How does one combine drawing one story while writing another, especially when they take place over 100 years apart? Selznick said, “All of the books that I do always start with words anyway. I never start by drawing anything. I mean, even if I know that something is going to be pictures in the end, I still will write descriptions of what things look like, and I will write outlines of what I want the narrative to be.” He further explained that his approach to writing moves from a macro level to a micro level. He begins with the setting. From there, he thinks about the plot. He then thinks of the plot in terms of events. The characters are the final piece. He determines what kind of person would drive those events to happen and then what emotions would be involved in the events of the plot. Since “Hugo Cabret” was the first book in which he used this movement between images and words to tell a story, he had to remove text after writing the story and replace it with images that tell those parts of the story.

Selznick explained the challenge of the novel being the first story told with this unique combination of words and images: “I didn’t know if the reader would be able to quite understand what was happening where the pictures aren’t showing something the words had just described. The pictures are generally moving the story forward the way the words do, and that’s why in ‘Hugo’ there’s a brief introduction that in a way teaches you how to read the book that you’re about to read. And then it became clear very quickly after the book was published that people didn’t have any problem reading the book.”

Selznick’s books are rich with details, both in images and words. To create that much detail in his work, he fills his studio with props. He explained those he used while writing “The Marvels,” which include a small clay dragon that he made to study while drawing the dragon in the book and a model of a sailing ship, which he also made. He surrounded himself with books about actors and the theater. He even made a theater for reference: “I bought a 19th century paper model of a theater which I had to cut out and glue together so I could see what the architecture of the theater would be like.”

Selznick’s audience was initially preteens as his main characters tend to be in the 10-13 year range; however, his audience has grown and many adults are huge fans of his books as well. “I write my books for kids. I love having kids as my audience. I think they’re the best audience. But I also love that adults read them too. I think that’s fantastic.” A lot happened to Selznick when he was ten, and he shared that he believes this is why his characters tend to be around that age.

So what advice would Brian Selznick like to share with the young readers who have been impatiently awaiting this book? This question brought our conversation back to Maurice Sendak, who Selznick said “always encouraged me to just make the book I wanted to make and do the thing I feel the most passionate about even if it doesn’t seem like it is a commercial idea or if people tell you that that doesn’t sound like it’s right. If you feel very passionate about it, that’s the reason to pursue it.”  He further explained that he loves silent movies. He decided that Hugo would like silent movies too, even though “that is not an idea that sounds like a big popular topic.” He was surprised to hear from young readers who started watching silent movies after reading Hugo’s story.  Those young readers liked Hugo so much, they wanted to watch the movies in the book, and “I’ve had kids tell me that they’ve watched silent movies and have put together silent movie festivals in their town. So it’s really great.” The big message he hopes children take away from this: “I think Maurice is right. You have to do the thing you feel the most passionate about.” I couldn’t agree more.

As intrigued as I was to hear about Selznick’s writing process, I was equally intrigued to have this time to talk to and get to know the man behind these books. Whenever I find an author whose work I love, I am always curious about the person behind the books. I hoped he was as awesome as his characters, and he was. Selznick was even easier to speak with than I expected. He was kind and so happy that my children were there because we would be staying for his author talk. Mid interview, he turned to my daughter, after I shared that I would borrow her copy of “Wonderstruck” after she fell asleep, to ask her if she had just gotten her copy of “The Marvels” that night. While he simply asked, “You just got your copy tonight, right? I hope you like it,” those simple words meant the world to her. It was a moment that will be remembered for years, one that is already referred to by my children as “the best night ever.” So before I finish up this article, I have to include a thank you. Thank you, Brian Selznick.