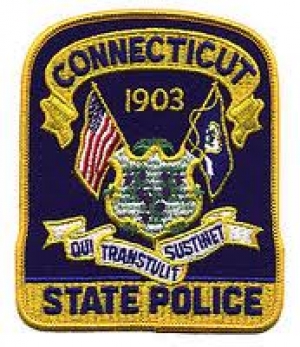 On July 4, 2015 at approximately 9:15 a.m., A Trooper from Troop A-Southbury  was conducting a check of the I-84 Exit 1 Commuter Lot in Danbury, when he approached a vehicle with a male passed out at the steering wheel.

The sole occupant of the vehicle, Marc D. Debenigno, had narcotics and drug paraphernalia on the passenger seat beside him.  The Trooper initiated an investigation, woke Debenigno, and he stepped from the vehicle.  The Trooper determined Debenigno was not having a medical emergency, and placed him under arrest.

Debenigno resisted arrested and began to struggle with the Trooper as he was being handcuffed. The Trooper deployed his taser, but Debenigno was not struck.

The vehicle pursuit continued on CT highways, before it was terminated on Route 7 southbound just north of the Ridgefield line when Debenigno’s vehicle struck a guard rail. Debenigno then exited his vehicle and engaged Troopers in a foot pursuit jumping into a large swamp.

On July 4, 2015 at approximately 3:10 p.m. Troopers located Debenigno in swamp.  Debenigno was taken into custody and transported by EMS to Danbury Hospital for evaluation.

The Narcotics and drug paraphernalia were seized as evidence and transported to Troop A-Southbury.  Debenigno will be held at Troop A upon his release from the hospital.

There were no Trooper or civilian injuries.