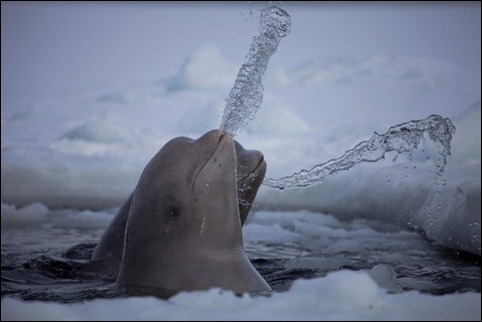 Darien, Connecticut, US – The plight of captive whales and other marine animals is gathering increasingly critical attention in the media; and this week the even the U.S. government got in on the whale-protection act, denying the Georgia Aquarium's permit to import 18 beluga whales captured in the Sea of Okhotsk, off eastern Russia, for public display in the United States. [Source: http://ow.ly/nHjqO]

"The U.S. government sends an important message this week to industries profiting from marine mammals' captivity, in the States, as well as in China, Iran and elsewhere," said Friends of Animals president Priscilla Feral.
The Marine Mammal Protection Act bars the import, export, and sale of any marine mammal, or parts or products derived from them, within the United States. But the amended Act currently allows "takes" of marine mammals for various industries, contrary to the primary purpose of the law.
Georgia Aquarium made the application last summer. In October, Friends of Animals urged the National Oceanic and Atmospheric Administration (NOAA) to block the importation, and encouraged all members to send personal comments to the same effect.

Retired Professor Richard Steiner, currently the marine conservation biologist for Alaska-based Oasis Earth [http://www.oasis-earth.com/], said, "A huge congratulations on this! Keeping these intelligent marine mammals in aquaria, in a tank, to entertain humans and make money, is one of those disgusting behaviors that will make historians of the 22nd century wonder what the hell was wrong with those folks back then."

Belugas in Russian waters are subject to capture operations in Russia and at risk of climate disruption, pollution, noise, vessel traffic, oil and gas exploration, and the overwhelming effects of the fish trade.

Yet Sea World in San Antonio, San Diego, and Orlando, the Shedd Aquarium in Chicago, the Mystic Aquarium in Connecticut, and the Georgia Aquarium in Atlanta market these small, white, vocal whales to customers who pay $140 to $250.

Thirty-one beluga whales live in displays in the U.S. in tanks of glass and concrete, far from the freedom of the ocean.

Dr. Lori Marino, an expert on cetaceans who serves on the faculty at the Emory Center for Ethics, said, "Belugas and other cetaceans remember the arc of their life — where they were, who they knew, what they did — and they can compare that to their life in captivity. I cannot imagine that brings them anything other than despair."

"We believe the outcry surrounding the Georgia Aquarium permit signals the decline of capturing cetaceans for the entertainment industry—whatever the claimed purpose of the captivity may be."

Five of the whales penned for importation were babies when captured between 2006 and 2011. The younger whales may still be nursing.

Friends of Animals [http://www.friendsofanimals.org] is a non-profit advocacy organization incorporated in the state of New York since 1957, with a goal of freeing animals from cruelty and institutionalized exploitation around the world. The group defends at-risk animals including marine species.