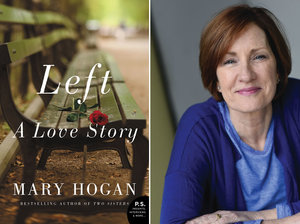 Beth Paris in Conversation with Author Mary Hogan at Darien Library on Tuesday, August 21 from 7:00 pm - 8:00 pm in the Community Room

Beth Paris, Gerontologist and Director of Darien Senior Programs, will speak in conversation with Mary Hogan, author of Left: A Love Story. In this beautifully crafted novel from this bestselling author comes the story of a woman who retreats into a fantasy world on New York City’s Upper West Side as she slowly loses her once whip-smart husband to dementia.

About Left: A Love Story

It started as a dream vacation in Spain, with Fay and Paul Agarra enjoying all the delights of a European holiday. A respected New York City judge, Paul has always been the man Fay can rely on, no matter what. When he inexplicably disappears from a Barcelona street corner, Fay knows something is terribly wrong. Once reunited, Paul shrugs off the episode as a simple misunderstanding—but Fay suspects her almost perfect life has taken a dark and sudden turn.

Soon there are more signs that Paul is beginning to change. Bouts of forgetfulness lead to mistakes in the courtroom. Simple tasks cause unexplainable outbursts of anger. Fay’s worst suspicions are realized when she learns her husband—her rock, her love, her everything—is succumbing to the ravages of dementia.

As her husband transforms before her very eyes, Fay copes with her fears by retreating into a fantasy life filled with promise instead of pain. In Fay’s invented world, she imagines herself living a glamorous life free from heartache, with a handsome neighbor she barely knows rescuing her from a future she can’t accept.

Poignant and beautifully crafted, Left is an unforgettable tale about life’s aching uncertainties—and a woman who discovers that somewhere between hope and reality, an unexpected future will find its way forward.

The Darien Library is proud to cosponsor this event with At Home in Darien and Darien Senior Programs. Books will be available for purchase courtesy of Barrett Bookstore. Refreshments will be served.

Beth Paris has worked for the Town of Darien since 2009 first as Coordinator of Darien Senior Activities Center then as Department Head and Director of Darien Senior Programs at the Mather Center. She has been working in the field of aging for over 35 years, specializing in dementia and community-based services. She serves as a Caregiver Support Group Leader and a presenter of the Caregiver Training Course for the Southwest Connecticut Alzheimer’s Association in Fairfield County. She earned a B.S. in Gerontology and Mental Health from the University of Bridgeport.

Mary Hogan is the bestselling author of Two Sisters and the historical novel, The Woman in the Photo. Previous novels include the young adult titles, The Serious Kiss, Perfect Girl and Pretty Face. Mary lives in New York City with her husband, actor Robert Hogan, and their Catahoula Leopard rescue dog, Lucy. Find out more at MaryHogan.com

Can't make the live event? Check out the video recording at DarienLibrary.tv