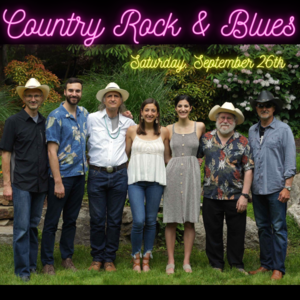 Award-winning Nashville recording artists and local country western band, Gunsmoke is performing an outdoor Music for Hope concert, Country Rock and Blues at the Piedmont Club in Darien on Saturday, September 26th. Proceeds from the concert will be donated to the St. Jude Children’s Research Hospital. Special musical guests performing classic rock and rhythm and blues will join Gunsmoke in the club’s parking lot, where social distancing will be observed, and seating limited.

Gunsmoke performs regularly at Broadway’s Opry City Stage and has recorded six albums, performed for two sitting Presidents of the United States, and has been enshrined in the Connecticut country music hall of fame. The band was formed by brothers Jeff and Nick DeMaio Jr. of Darien, and has been performing classic country, western, swing and rockabilly music for over 25 years. In addition to Jeff and Nick, Gunsmoke includes band members Christina Mae, Van Manakas, Guy "Fooch" Fischetti and Nick DeMaio III.

Gunsmoke established Music for Hope in 2010 and has raised thousands of dollars to fight cancer on both the local and national level through concerts, dinner dances and recordings. Founded by Danny Thomas in 1962, St. Jude’s is at the cutting edge of research for pediatric cancer. All costs are covered by donations, as no family ever receives a bill from the hospital. In light of the impact of Covid-19, Gunsmoke has chosen St. Jude’s to be this year’s beneficiary of the Music for Hope concert.

The Piedmont, Darien’s Italian American Club established in 1916, serves as the meeting place for many town groups and civic organizations. It also hosts blood drives, sponsors youth sports, gives scholarships and, in non-Covid times, hosts a monthly Men’s Dinner. The Piedmont has partnered with Music for Hope and Gunsmoke in past years for their benefit concerts.

Admission for the Music for Hope benefit concert is $10. Reservations or donations may be made in advance at 203 655-7884. Music begins at 6 p.m. and food will be available for purchase. Rain date for the event is Sunday, September 27th. The Piedmont Club is located at 152 Hecker Avenue in Darien. For more information about the Piedmont Club, go to piedmontclub.org. To find out more about Gunsmoke, visit gunsmokeband.com.