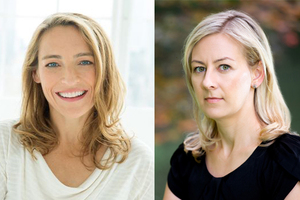 Darien Library and Barrett Bookstore are thrilled to welcome Darien's own Tessa Wegert for a conversation about her new book The Dead Season. Novelist Wendy Walker whose new book, Don't Look For Me was published this fall will join Tessa in conversation.

About The Dead Season

Senior Investigator Shana Merchant has spent years running from her past. But she never imagined a murder case would drive her to the most dangerous place of all—home.

After leaving the NYPD following her abduction by serial killer Blake Bram, Shana Merchant hoped for a fresh start in the Thousand Islands of Upstate New York. Her former tormentor has other plans. Shana and Bram share more than just a hometown, and he won’t let her forget it. When the decades-old skeleton of Shana’s estranged uncle is uncovered, Bram issues a challenge: Return home to Vermont and solve the cold case, or the blood he spills next will be on her hands.

As Shana interviews members of her family and the community, mining for secrets that could help her solve her uncle’s murder, she begins to realize how little she remembers of her childhood. And when Bram grows impatient and kidnaps again, leaving a trail of clues Shana alone can understand, she knows his new victim will only survive if she wins the psychopath’s twisted game. In order to solve one mystery, Shana must wade into her murky past to unravel another.

About the Author: Tessa Wegert

Tessa Wegert is a Canadian expat, journalist, and former digital media strategist. Her business and marketing articles have appeared in such publications as Forbes, The Huffington Post, Adweek, and The Economist.

About Don’t Look for Me

In the novel, a grief-stricken wife and mother has a fleeting thought about walking away from her life and then mysteriously disappears. All signs point to a “walk away,” which happens all the time—women disappear, desperate to leave their lives behind and start over. Molly Clarke had plenty of reasons to do just that. But is it really what happened?

When a new lead comes in two weeks after the search has ended, Molly’s daughter, Nicole, begins to wonder. In spite of their strained relationship, nothing about her mother’s disappearance makes sense. When Nicole learns about another woman who vanished from the same small town, and then discovers a mysterious, secluded property, she inches closer to the truth about that night—and the danger surrounding her.

Don’t Look for Me is a story about a woman with a tragic past and seemingly bleak future. A woman who has a flash about walking away from her life. A woman who takes a ride from a man, and his young daughter who reminds her of the child she lost years before,” explains Walker. “Molly’s disappearance and her daughter’s desperate search to find her fill the pages with twists, turns, and unexpected revelations. But at its heart, this is a story about grief, acceptance, and the power of redemption.”

About the Author: Wendy Walker

Wendy Walker is the bestselling author of All is Not Forgotten, Emma in the Night, and The Night Before, with rights sold in twenty-three foreign languages as well as options in film and television. Her most recent thriller, Don’t Look for Me, was published in September.

This event is co-sponsored by Barrett Bookstore. If you'd like to add to your suspense collection, please visit their website.

Not a member of Darien Library, or need help registering? Email Adult Programming at  This email address is being protected from spambots. You need JavaScript enabled to view it. .