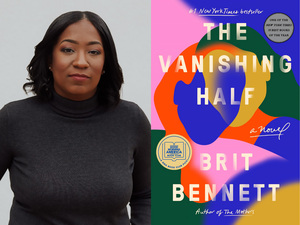 Darien Library presents the sixth annual The Novel Tea fundraiser featuring Brit Bennett, bestselling author of The Vanishing Half. The luncheon will be held at Wee Burn Country Club on Wednesday, October 27 from 11 a.m. to 2 p.m.

About The Vanishing Half

“The Vanishing Half is a thought-provoking novel with complicated relationships and unforgettable characters,” said Alex Eising, Development Chair for the Board of Trustees. “It is a poignant story of two sisters who choose different paths that they must ultimately come to terms with. Brit Bennett does a beautiful job of telling the story of racial identity, relationships, and being true to yourself. Bennett has outdone herself with her second novel. This is an event not to be missed.”

The Vanishing Half was a #1 New York Times Bestseller, a Good Morning America Book Club Pick, a 2021 Women's Prize finalist, and a Best Book of 2020 according to The New York Times, The Washington Post, NPR, People, Time Magazine, Vanity Fair, and Glamour. The Vanishing Half is also currently in development for a new series with HBO.

Born and raised in Southern California, Brit Bennett graduated from Stanford University and later earned her MFA in fiction at the University of Michigan. Her debut novel, The Mothers, was a New York Times bestseller and a finalist for both the NBCC John Leonard First Novel Prize and the PEN/Robert W. Bingham Prize for Debut Fiction. Her second novel, The Vanishing Half, was an instant #1 New York Times bestseller, longlisted for the National Book Award, a finalist for the Women’s Prize, and named one of the ten best books of the year by The New York Times.

Bennett has been named a National Book Foundation 5 Under 35 honoree, a NAACP Image Award Finalist, and one of Time’s Next 100 Influential People. Her essays have been featured in The New Yorker, The New York Times Magazine, The Paris Review, and Jezebel.

There will also be a silent auction featuring items that can only be found at Darien Library events. All funds raised from The Novel Tea will be dedicated to library resources, including new technology, purchasing new books and materials, and supporting programs and guest speakers.