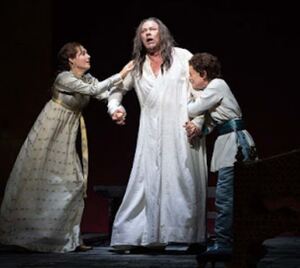 LIVE in New York or broadcast in theaters via the MET's LIVE IN HD series, these productions - and others - fulfill the stalwart, emotional depth and spectacle that is the MET with thrilling, full-bodied vocals, staging, direction, performance and defining orchestral expression.

Rejuvenated with distinctive timbre and narrative illumination, the opera itself unfolds with a lucid mindset that amplifies the justice of the drama, the depth and vocal emission of Mussorgsky's music and the well-organized, scene-by-scene development and plotting of the actual story.

Taking its cue from the real-life events of Boris Godunov, the Tzar of Russia during the late 16th century, Mussorgsky's opera charts the title character's rise to the throne, his decade-reign over Russia, his tortured past, his recurring memories of the child he murdered and lastly, a fatal heart attack that provides a tragic ending to the story. As with most operas, it helps if you know the story in advance (both the Ridgefield Playhouse and the MET provide playbills with detailed synopses) or actually researches its origins via the internet, your mobile phone or an afternoon trip to the library. If that's not your thing, paying close attention to the actual performance is mandatory. Otherwise, you'll find yourself completely lost wondering who is who, what is going on or what purpose the actual vocals serve the characters themselves and advancement of the intricate libretto.

Stephen Wadsworth, best known for his staging of Wagner's "Ring" cycle, Moliere's "Don Juan," Handel's "Rodelinda" and the Broadway and West End productions of Terrence McNally's "Master Class," directs this 1869 edition of "Boris Godunov" with an acquired briskness, strength and pathos that allows the material to breathe, resonate and magnify its required purpose. Previously, he staged the MET's lofty 2010 edition of Mussorgsky's classic opera, which took its cue from the 1872 revised version of a piece that chilled and expanded the already proven and faultless plot, its moral conscience and Tsarist hauteur.

A master craftsman in his own right - eleven years later - Wadsworth spins yet another passionate telling that is persuasive in both execution and certainty. Conveyed with absolute seriousness, he balances time, atmosphere, characterization, interplay and operatic storytelling cogently. He leads the cast - principals, supporting players, ensemble - through the Tzar's cemented machinations always knowing when to pause, excite, sentimentalize, enrage or surprise.  In turn, "Boris Godunov" never falters or skips a beat. Given its intermission-less two hours and twenty minutes running time, it is fast and fluid with plenty of story to tell as it moves forward to its justifiable conclusion.
For those not present at the Lincoln Plaza location - the HD LIVE edition (at the Ridgefield Playhouse and other venues worldwide) - the production benefits from exceptional camera work and editing that frames the action in close up, full front and reaction wise, all of which is precisely timed and executed with a trained cinematic eye that heightens the opera's dramatic momentum, musicality, darkness, tableaux and savored viscera.

The headline attraction of any opera - aside from its mammoth, stellar cast - is the conductor, of course,  which, in "Boris Godunov" is wisely-chosen German-born maestro Sebastian Weigle whose orchestral conductor credits include "Die Fledermaus," "Lear," "Tristan und Isolde," the four-part "Der Ring des Nibelungen" and the MET's "Die Zauberflote." Here, Weigle presents a powerful orchestral sound of fullness, versatility and conviction. The intensity of Mussorgsky's work is both natural and realistic with careful attention paid closely to execution, performance, fluidity, detail, dramatic tempo and vocal catharsis.

In turn, the music dazzles. It excites. It gets you thinking. It is beautifully shaped. It unfolds with beautifully crafted simplicity and influence. It is also superbly energized, basking in its own important crisp and conscious tempos, lead-ins, climaxes and edgy, powerful signaling. As is typical with the MET, the progression of the opera, the passages, the voices, the framing, the weight and overall interpretation rest largely on the music and how is portrayed and performed. As "Boris Godunov" unfolds, there is a certain freshness and uniqueness to it all, which Weigle and his team reenact with care, creation and intent. It all works splendidly in terms of variety, sound, melodrama, declamation and lyrical sentiment and tension. Bravo!

In the title role, a part he has played before, Rene Pape sings and acts with a committed strongness and power that reflects his character's pulse, heartbeat, emotions, drive and pending tragic history. It's a performance like no other that Pape greets with a mighty effectiveness and voice that serves the material well. Playing the role of the Holy Fool, Miles Mykkaren offers a focused, determined characterization that fascinates every time he appears on stage.
Other fine performances are delivered by Ain Anger as Pimen, David Butt Philip as Grigory, Erika Baikoff as Xenia, Megan Marino as Feodor, Aleksey Bogdanov as Schelkalov, Maxim Paster as Shuisky and Ryan Speedo Green as Varlaam.

An impressive, appropriately balanced opera, "Boris Godunov" provides abiding involvement and placement to Mussorgsky's rarely-performed Russian opera. It is unique. It is driven. It is paint boxed with detail and color. It is yet another trump card for the MET and its cinematic LIVE IN HD series.

As staged by Stephen Wadsworth, it is full of guilt, strongness and effort. The lead performance of Rene Pape, comes coupled with brilliance, power and excitement. The subject matter, dappled with illustrated persuasion and seraphic sculpting by conductor Sebastian Weigle, is presented with assured nature, dramatic instinct and thematic release. Musically, it respects and celebrates the origins of its creator bringing a lyrical pulse and cohesiveness to the original orchestrations, offset by an unbroken kinship and luster well worthy of a standing ovation.