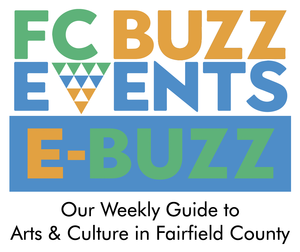 This weekend is all about art, comedy, celebrating Dr. Martin Luther King, Jr. and a bit of magic.

All are invited to the opening reception at The Contemporary Art Modern Project (CAMP Gallery) for Margaret Roleke’s solo exhibit March on Society on Friday at 6:00 pm. Roleke’s work provokes a deep investigation into what the American legacy truly is.

Then on Saturday 1:00-3:00pm, The Flinn Gallery at the Greenwich Library is offering an Artist Talk for their new exhibit, Alignments, featuring three artists whose abstract work overlaps in color, strata, and form. Meghan Brady (a Greenwich native), Ben Godward, and Erika Ranee will speak about their work in conversation with the curator, Tracy McKenna, and answer questions from the audience

Here’s a captivating show for the whole family! Ridgefield Playhouse presents REZA – Edge of Illusion on Saturday at 4:30pm. Reza brings rock concert level lighting and production merged with the most incredible cutting-edge magic and signature grand-scale illusions. Young and fresh, intriguing and engaging, it is no wonder Reza has been recognized as a world-class entertainer.

For guaranteed laughs all night long, come see Matt Pavich LIVE! at the Fairfield Comedy Club on Saturday at 7:00pm. A standup comedian, actor, and creator from Astoria, Matt is the winner of “New York’s Funniest” competition at the 2015 New York Comedy Festival, was recently featured in sketches on HBO’s “Last Week Tonight with John Oliver” and was selected in the 2016 ABC diversity showcase.

More laughs in Norwalk as The Wall Street Theater presents Colin Quinn: The Last Best Hope Tour on Saturday at 8:00 pm. From MTV’s “Remote Control” to “SNL” to Comedy Central’s “Tough Crowd with Colin Quinn,” this comedian is about as famous as they come.

On Sunday at 2:30 pm, honor Dr. Martin Luther King Jr. right from your home. The Westport Library offers its 16th Annual Martin Luther King, Jr. Celebration virtually this year. This event features Heather McGhee, author of New York Times bestseller, THE SUM OF US: What Racism Costs Everyone and How We Can Prosper Together. The program will also include a recital by the Bridgeport Boys Choir and a dance performed by the Regional Center for the Arts.

It’s Christmas in January on Sunday at Fairfield’s FTC Stage One. At 7:45 pm, doors open for A Very Magnetic Post-Christmas Show with Morgan James. Called "the most promising young vocalist to come along so far this century" by The Wall Street Journal, Morgan has been described as having it all: “soul, charm, chops, blue-chip musicianship, and the kind of absolute individuality that makes her singing as recognizable as a fingerprint.”

Finally, one last chance to remember Dr. Martin Luther King Jr. on Monday at 1:30pm. Organized by the young people of Bridgeport, Connect-Us Presents: Bridgeport Has A Dream is at The Klein Auditorium in Bridgeport. This special MLK Day performance celebrates Dr. King in the very location where he spoke in 1961 and 1964 and where he was honored in a memorial service four days after his 1968 assassination.

For details on these and hundreds more events check fcbuzzevents at culturalalliancefc.org