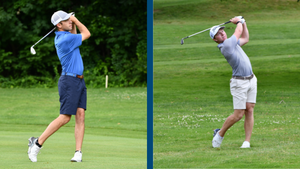 The 120th Connecticut Amateur at Ridgewood Country Club will come down to a 36-hole championship match between two-time winner Rick Dowling and Ben Carpenter.

Carpenter (CC of Darien) was the first to earn his spot in the finals with a 5&4 win over Ben Conroy (New Haven CC). The rising sophomore at Yale took the lead with a birdie on the par-4 second hole and never relinquished the advantage. “I am super excited for the championship match,” said Carpenter. “I just want to go have fun and play my game.”

Conroy, the 2018 champion, hung tough but a two hole stretch late on the front nine proved to be too much to overcome.

Leading 2 up Carpenter pulled his tee shot left on the 202 yard par-3 eighth and faced what appeared to be an impossible up and down. Unable to play towards the pin Carpenter’s second shot landed 20 feet to the left of the hole and trickled down to 15 feet below the cup. Moments later Carpenter rolled in the unlikely par. When Conroy failed to convert a sand save from the right greenside bunker the advantage was 3 up.

“My up and down on No. 8 might have been one of the best up and downs that I have ever had and I think that really turned the momentum my way,” said Carpenter who won the last two holes of his quarterfinal match against Jantzen Vargas (Quinnatisset CC) to win 1 up.

On the ensuing hole, Conroy playing aggressively drove the green on the downhill 309 yard par-4 ninth. His eagle putt from 40 feet was lagged beautifully to 2 feet earning him a conceded birdie. Meanwhile, Carpenter was scrambling. His drive went right into the rough and his approach shot came to rest 15 feet beyond the hole. With Conroy, a winner 1 up winner over Chris Ayers (Goodwin Park GC) in the quarterfinals, already in for birdie Carpenter put on a committed stroke and watched as his birdie putt slammed into the bottom of the cup. A back-breaking tie that kept the lead at 3 up heading to the second nine.

“In the semifinals credit to my short game, it was A+,” Carpenter said. “I had some huge up and downs that I think caught Ben [Conroy] off guard.”

On the back nine, Carpenter didn’t let up sealing the match with consecutive wins on Nos. 13 and 14.

Roman, a rising sophomore at Loyola University Maryland, led early in the match but Dowling slowly chipped away winning Nos. 9 and 11 with birdies to tie the match. The match remained tied until Roman regained the lead with a birdie on the par-5 15th setting the stage for a duel down the stretch.

Roman, the 32-seed, once again found himself in a familiar spot – leading a tight match late – while Dowling was playing past the 15th hole for the first time since Tuesday’s final round of stroke play. Each of Roman’s previous three matches reached at least the 18th hole with the dramatic quarterfinal match against Dan Gallo (Mill River CC) going 20 holes.

On the 225 yard par-3 17th Roman cracked the door open when he missed the green left while Dowling found the putting surface. Facing a difficult chip Roman left himself with an 8 footer for par while Dowling lagged his putt from 35 feet to within a foot for a conceded par. Roman still had a chance to tie the hole but when his par putt slid by the match was tied.

Seeing his chance Dowling split the fairway with his drive on the 555 yard par-5 closing hole. Playing next Roman missed the fairway right.

Blocked out by a tree Roman’s second shot ended up under a tree and his third shot found the right greenside bunker. Dowling played it safe laying up to 70 yards and then knocked his wedge to 7 feet.

“I’ve been working on nice abbreviated wedges with my coach at the Golf Performance Center and I hit it exactly how I wanted to,” Dowling said.

Roman played a nifty bunker shot to 5 feet but he never got a chance to hit the putt as Dowling rolled in his birdie putt to win the match 1 up.

“I just wanted to stick with it down the stretch. I was losing energy but anything can happen. The pins were tough and the holes were hard coming in so I just tried to hit good golf shots. I’m just happy to move on,” Dowling said.

Beginning at 7:30 a.m. the 120th Connecticut Amateur will conclude on Friday with the playing of the 36-hole championship match. Spectators are welcome.