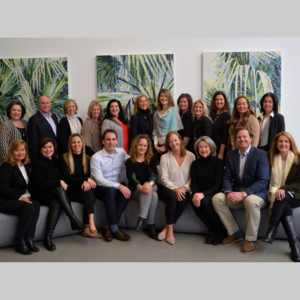 Compass, a residential real estate technology company, has strengthened its Connecticut presence with its expansion into Darien. The company has hired 25 top-producing agents for the newly expanded office since June.

“Interest in Compass Darien has really exploded since we hired our first agents over the summer; we’ve already had to expand our office space in order to accommodate our growth,” explained Connecticut Sales Manager Amanda Bryan. The Darien office is currently operating out of Havyn at 320 Boston Post Road and is investigating a more permanent spot in Darien.

One of the office’s most notable achievements came just two months after Compass began focusing on Darien. In August, Compass Connecticut represented both the buyer and seller of the highest-priced sale in Darien since 2017 - a $12.5 million home on Pear Tree Point Road.

“We are really proud of the way Compass has taken off in Darien. Our growth has been organic, and the agents are really excited about what Compass offers both agents and their clients. The most enthusiastically adopted service we offer is Compass Concierge, where Compass provides capital to sellers to prepare their homes for sale with no fees or interest. This is a huge competitive advantage for agents and, most importantly, beneficial to our sellers as buyers gravitate toward homes that are move-in ready,” added Ms. Bryan.

Compass currently operates three offices in Fairfield County including Darien, Westport, and Greenwich with agents across Connecticut including top agents in Fairfield, Rowayton, New Canaan, Wilton, Stamford and Weston. In a little over one year, Compass Connecticut has grown to more than 110 agents. Nationwide, Compass has more than 15,500 agents across more than 135 cities and is the largest independently owned real estate brokerage in the country. Find out more about Compass at compass.com or contact Amanda Bryan at (203) 246-1064.