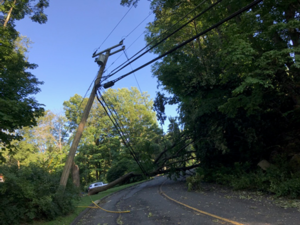 Eversource just announced in a press release that their tree and line crew are "working around-the-clock" to repair the widespread damage to the electric system caused by Tropical Storm Isaias.

"While adhering to strict COVID-19 pandemic safety protocols, utility crews from Canada, Michigan and Massachusetts are assisting in the major restoration effort – with additional outside crews arriving in the state over the next 24 hours," Eversource states.

According to the company, tree and line crew are focused on clearing downed trees and branches in order to open up access to blocked roads. "As of 11:30 a.m., crews have restored power to more than 332,000 customers since the storm began, while approximately 533,000 Eversource customers in Connecticut remain without power," they say.

Eversource reports that "later today", residents will be given an estimate of when it expects to have power restored to a majority of affected customers.

According to the company, issues related to Eversource’s outage-reporting system have been resolved and they encourage customers to report any outage online at www.eversource.com, or by calling 800-286-2000. Customers who signed up for the company’s two-way texting feature can send a text to report an outage and receive outage updates as they happen.

The company reminds customers to always stay clear of downed wires, report them immediately to 9-1-1 and to be cautious while continuing with their own storm clean up – be careful moving or cutting tree limbs and look for any wires that may be entangled in debris. Additionally, customers who are without power and plan to use a generator are reminded to be sure the generator is located well away from their home or business and that the transfer switch is working properly.