Join the Chower of the Month club! Chowda Club by Chowdafest 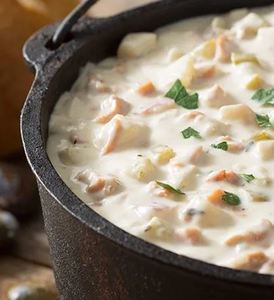 Chowda Club brings Chowdafest experience to the safety of your home - all year round!

To the surprise of no one, the 2020 New England Chowdafest originally scheduled for Oct 4, 2020 has been officially postponed until 2021. However, to the surprise of everyone, fans are happy about it. That’s because Chowdafest is proud to announce their new Chowda Club which is designed to bring the Chowdafest experience to the safety of your own home AND all year round!

Similar in concept to a ‘chowder-of-the-month-club’, two different quarts of chowders will be offered each month starting with the first delivery in the beginning of October which is the time Chowdafest is traditionally held. The timing intentionally coincides with their tradition of unofficially kicking off the start of the comfort food season.

“Two quarts of handcrafted goodness every month? How do I sign-up?” said Tony Cossuto, a long time fan who was happy to hear he can still get his chowder fix. The club will feature chowders, soups or bisque from two restaurants every month. A total of 24 restaurants from all over New England has been invited to participate.

The selection of soups will be seasonally appropriate and reflect all four categories Chowdafest is known for like New England Clam Chowder, Creative Chowders, Soups/Bisque and the popular Vegetarian. “There will be a 50/50 mix of both fan favorites plus those new to the event,” said Jim Keenan, creator of both Chowdafest and now the Chowda club. The club will kick off with five time champions Pike Place Chowder from Seattle and Our House Bistro from Vermont to be the club’s inaugural shipment. “They’re fan favorites and we want to start the club on a great note,” Keenan added.

Historically, Chowdafest has made the fight against hunger their charity, providing over three million meals over their twelve years but now their focus as changed. The Chowda Club will benefit restaurants that have been so adversely affected by this pandemic by earning a portion from the sales.

The club is much more than just great chowder as members get to rate all the soup they sample, just as if they attended Chowdafest. Unlike Chowdafest, it won’t determine who is the best between them but it will establish a star rating, up to five stars, that each restaurant can promote. Every member will be emailed a unique code to do this online each month online..

This new club is designed to co-exist with Chowdafest but no alternative date has been determined for Chowdafest at this time. Keenan says that he thought Chowdafest had it’s run but “Now we’re excited about this new venture”.

The club will provide an e-newsletter each month to members and receive a more extensive version That just an announcement of chowders available. They’ll receive chef videos, recipes, inside information and more. They are currently designing a merchandise line for their fans to include such things as caps, aprons, t-shirts, and soup mugs which members will get first dibs on. Maybe the best part is that membership costs only $10, half the price of what it would cost to attend Chowdafest.

Of course, that doesn’t provide for the incredible soup you can buy each month which you don’t have to belong to purchase. But only members get to rate the soups plus get all the extras. Keenan calls members “clam-bassadors” and says “For only $10, you can’t afford not to be an official member”.

Keenan says months of planning went into the design of the club from finding the perfect chowders to feature right down to how to deliver them cold. The club is limiting delivery to those living in New England. “From our perspective, it’s much easier to plan Chowdafest, fewer moving parts” noted Keenan.

Keenan says this initiative opened new doors for sponsors like Samuel Adams who is now the official beer of the club and will provide monthly pairing recommendations with each e-newsletter. Keeping the New England influence alive, Keenan says that the first 200 people who become members can receive a complimentary trial subscription to Yankee Magazine, a bimonthly magazine about lifestyle, travel and culture in the New England since 1935. “All our sponsors play a role in the club like Westminster Bakery is including their delicious oyster crackers with each shipment. We’re thrilled to have all our sponsors,” he noted

For additional information about this Chowda Club by Chowdafest and to become a member, please visit www.Chowda.Club.