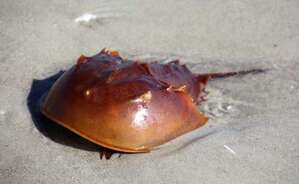 Darien, CT - Friends of Animals has asked the Connecticut Department of Energy and Environmental Protection to rescind commercial horseshoe crab fishing licenses effective immediately through the end of the commercial harvest season, July 7, 2021.

The Atlantic States Marine Fisheries Commission, which oversees management of the species on the East Coast, has downgraded the stocks of horseshoe crabs in the New York Region, which includes Long Island Sound, in each of the past three assessments, from Good in 2009 to Neutral in 2013 to Poor in 2019.

Jennifer H. Mattei, a biology professor at Sacred Heart University who heads up Project Limulus to count and track horseshoe crabs in Long Island Sound, says her research shows that the adult spawning populations are declining to precariously low levels – and worse, the breeding population is aging, with not enough younger horseshoe crabs to replace older ones. The crabs, which live as many as 20 years, do not begin to breed until they are about 10 years old. “I would support a complete ban on harvest for bait fishery in Connecticut,” says Mattei.

The bulk of Connecticut’s horseshoe crab cull is sold as bait, used to catch whelk and American eel, itself a depleted species. The whelk, or conch, are sold to restaurants; eels captured in pots using horseshoe crabs as bait have traditionally been sold as food for European markets and as bait to catch striped bass and other game fish in area waters. In some Atlantic states, horseshoe crabs are captured to withdraw their blood, which is used by medical labs to test the safety of vaccines and other drugs.

“It makes no sense to continue killing horseshoe crabs and removing them from the crucial ecological niche they fill simply to use them as bait so that a few people can have their smoked eel and conch fritters,” Feral adds. “Horseshoe crabs deserve to be left alone and to be allowed to play their time-honored role as a keystone species.”

The state of Connecticut lags behind its neighbors in efforts to protect this imperiled “living fossil,” one that is important to the survival of several other species, including a number of migratory shorebirds, who rely on horseshoe crab eggs to fuel their flights north. New Jersey declared a moratorium on horseshoe crab harvesting in 2008. New York has a quota of 366,272 horseshoe crabs per year but caps the limit at 150,000, and over the past two years has closed the fishery during peak spawning times at the end of May and beginning of June. The quota for Connecticut’s annual haul is 48,689.

“What will it take for us to realize that their ancient wonder defies the logic that 15 license holders in Connecticut should kill thousands of them each summer to be used for bait?  It’s reprehensible,” says Feral. “International Horseshoe Crab Day is Sunday, June 20. For once, let them celebrate their day without the fear of being hunted.”

Darien, Conn.-based Friends of Animals, an international animal protection organization founded in 1957, advocates for the rights of animals, free-living and domestic around the world.www.friendsofanimals.org