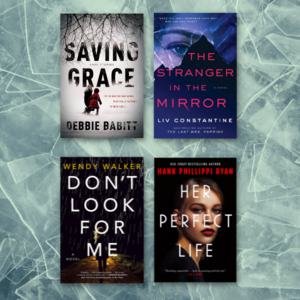 Start 2022 at the edge of your seat with four bestselling thriller authors.

Darien Library and Barrett Bookstore are pleased to present a virtual evening with Debbie Babitt, author of Saving Grace; Lynne Constantine, author of The Stranger in the Mirror; Wendy Walker, author of Don’t Look for Me; and Hank Phillippi Ryan, author of Her Perfect Life.

Debbie Babitt has worked as a copy director for two Manhattan publishing companies. In addition, she has also worked as an actress, playwright, and drama critic. Her feature articles have appeared in CrimeReads, Suspense magazine, and Mystery & Suspense magazine. Debbie is a member of International Thriller Writers and Sisters in Crime organizations. She is the author of Saving Grace, her debut novel that was named One of the Most Anticipated Thrillers of 2021. First Victim is Debbie’s second novel, due out in June 2022.

Lynne Constantine is a well known author who writes with her sister under the pen name Liv Constantine. Together, they have published internationally bestselling novels such as The Last Mrs. Parrish as well as The Last Time I Saw You, The Wife Stalker, and The Stranger in the Mirror. Their critically acclaimed books have been praised by USA Today, The Sunday Times, People magazine, and Good Morning America, among many others, and their books have been translated into 28 languages, and are in development for both television and film.

Wendy Walker is a bestselling author of psychological suspense. Her books have been published in over 23 foreign languages and have been optioned for film and television. Prior to writing, she worked as a family lawyer and an investment banker. She holds degrees from Brown and Georgetown University and has lived in Fairfield County for most of her life. In addition to her latest thriller, Don’t Look for Me, Wendy just released an Audible Original novel, American Girl.

Hank Phillippi Ryan is a best selling author of 13 novels of suspense. She has won multiple prestigious awards for her crime fiction, including five Agathas, four Anthonys, and the coveted Mary Higgins Clark Award. In addition to writing, she is an award winning on-air investigative reporter for Boston’s WHDH-TV, and is the recipient of 37 EMMYs, 14 Edward R. Murrow awards and dozens of other honors for her groundbreaking journalism. Hank’s novels have been named "Best Thrillers of the Year" by Library Journal, New York Post, BOOK BUB, PopSugar, Real Simple magazine and others.