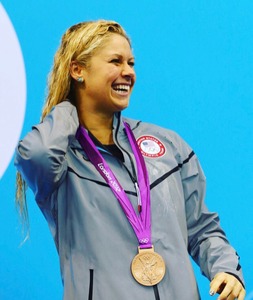 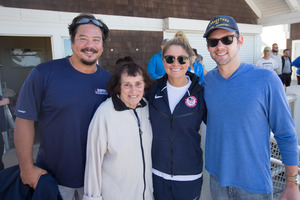 Elizabeth Beisel, a three-time Olympian  (2008, 2012, 2016), four-time Olympic gold and bronze medalist and 2016 Team USA captain, along with Craig Beardsley, the world record holder in the 200-meter butterfly and a former member of the U.S. Olympic Swim Team (1980), will be visiting the Darien YMCA on Saturday, April 23, 2022, as ambassadors for Swim Across America Fairfield County and to hold a swim clinic with the Darien Y Piranha swim team.

A public meet-and-greet with the Olympians will be held from 11:00 a.m. to 12:00 p.m., Saturday, April 23, in the lobby of The Darien YMCA, located at 2420 Post Road, Darien, Connecticut. The meet-and-greet is free and open to the public. No registration required for that portion of the day. Swim team members interested in the swim clinic should register directly with the Y.

Elizabeth Beisel has won a total of nine medals in major international competitions, four gold, one silver, and four bronze, spanning the Olympics in 2008, 2012 and 2016. Last year she made the record books again with her world record swim of 10.4 mile from mainland Rhode Island to Block Island, becoming the first woman to ever complete that swim. She undertook the open-water challenge as a fundraiser for the nonprofit Swim Across America (SAA) to benefit cancer research and patient programs in honor of her father, Charles “Ted” Lyons Beisel, who passed away from pancreatic cancer in July 2021. Elizabeth has been a long-time supporter of Swim Across America participating in several swims in Rhode Island and across the country. She is a resident of Rhode Island and is also well-known for being an Olympic commentator at the Beijing 2022 Winter Olympic Games, the Tokyo 2020 Summer Olympic Games held in 2021, as well as being a contestant on the popular TV series Survivor.

Craig Beardsley was the world record-holder in the 200-meter butterfly for three years in the early 1980s and qualified as a member of the 1980 U.S. Olympic Team, but could not compete in the Olympics because of the U.S. boycott of the Moscow Summer Olympic Games. Craig has been a long-time supporter of Swim Across America since it began in 1987 and was co-founded by Darien, Connecticut, resident Matt Vossler in honor of his college roommate Jeff Keith who is a cancer survivor. Today, Craig works with Swim Across America as the vice president of Partnerships. Craig is also married to Ann-Elizabeth McKay Hensel, a former member of the U.S. national figure skating team and they have two children and live in New Jersey.

“I’m excited to be able to visit Darien, the hometown of Swim Across America’s co-founder Matt Vossler, and work with the Y’s swim team on important competitive swimming skills,” said Elizabeth Beisel. “It’s also a great opportunity to meet the public and shine a light on Swim Across America’s mission to fight cancer, which actually started in 1987 with a swim in Long Island Sound. It’s also really great to work with the next generation of swimmers. To be able to combine swimming with fighting cancer is so close to my heart.”

“We love when we can bring our Olympians to community pools to help teach important competitive skills,” said Craig Beardsley. “Having a world-class facility like the Darien YMCA available to swimmers is a wonderful asset to the community. We are also thrilled that the Darien YMCA is in the backyard of one of our largest swims, the Swim Across America Fairfield County event that has a lot of participants from the Darien area. Having the swim clinic at the Y with a lot of our swimmers, ahead of the June 25th open water swim, is a great opportunity to hone in those skills and get prepared to #makewaves to #fightcancer.”

Swim Across America Fairfield County is in its 16th year #MakingWaves to #FightCancer and is proud to support its local beneficiary Alliance for Cancer Gene Therapy, which has funded some of the most promising cancer treatments and research in the nation, including the breakthrough CAR T gene therapy treatments for leukemia and lymphoma, which has led to several other recent FDA approved treatments for other types of cancer. The open water swim this year will be held on Saturday, June 25, 2022, and attracts hundreds of swimmers, volunteers, boaters, kayakers and supporters who spend a morning raising funds to fight cancer. To register for the June 25th open water swim or to learn more about Swim Across America Fairfield County, visit swimacrossamerica.org/fc.

Swim Across America, Inc. (SAA) is celebrating 35 years of raising money and awareness for cancer research, prevention and treatment through swimming-related events. With the help of hundreds of volunteers nationwide and past and current Olympians, Swim Across America is helping find a cure for cancer through athleticism, community outreach and direct service. To learn more visit swimacrossamerica.org/fc or follow on Facebook, Twitter or Instagram @SAAFairfieldCo.

Darien YMCA is a 501c3 nonprofit charitable organization with a mission to strengthen the foundation of the community through programs, services and relationships that build a healthy spirit, mind and body for all. For more information on Darien YMCA, visit darien-ymca.org or on Facebook and Instagram at @thedarienymca and Twitter @DarienYMCA.