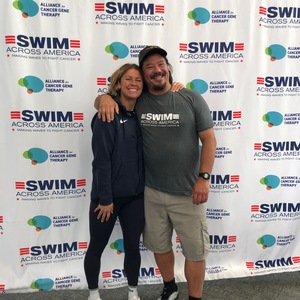 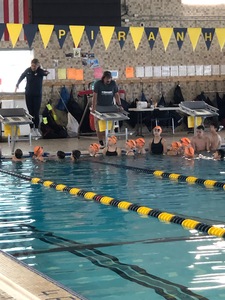 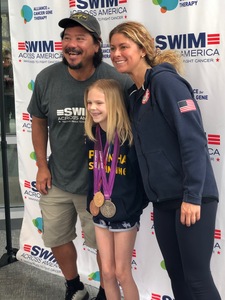 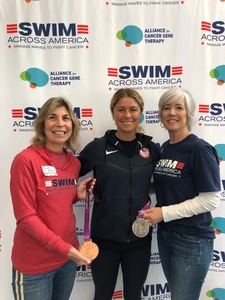 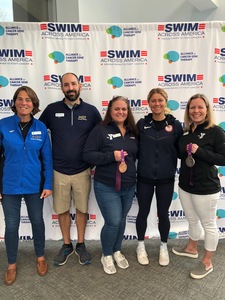 On Saturday, April 23, Olympic swimmers Craig Beardsley (1980) and Elizabeth Beisel (2008, 2012, 2016), taught, entertained and charmed local Darien YMCA Piranha swim team members and their families at a special event put on by Swim Across America Fairfield County at the Darien YMCA. The event was the second time  in four years Elizabeth Beisel has visited the Darien YMCA to hold a swim clinic with local swimmers and was at the request of Darien resident and Swim Across America co-founder Matt Vossler, who is also a member of the YMCA.

Elizabeth Beisel has won a total of nine medals in major international competitions, and won Silver and Bronze Olympic medals at the 2012 London Olympics. Last year she made the record books again with her world record swim of 10.4 mile from mainland Rhode Island to Block Island, becoming the first woman to ever complete that swim. She undertook the open-water challenge as a fundraiser for Swim Across America (SAA) to raise funds for cancer research and patient programs in honor of her father, Charles “Ted” Lyons Beisel, who passed away from pancreatic cancer in July 2021. Elizabeth has been a long-time supporter of Swim Across America participating in several swims across the country. She is a resident of Rhode Island and is also well-known for being an Olympic commentator at the Beijing 2022 Winter Olympic Games, the Tokyo 2020 Summer Olympic Games held in 2021, as well as being a contestant on the popular TV series Survivor.

Craig Beardsley, who was just announced will be inducted into the International Swimmer’s Hall of Fame this October, was the world record-holder in the 200-meter butterfly for three years in the early 1980s and qualified as a member of the 1980 U.S. Olympic Team, but could not compete in the Olympics because of the U.S. boycott of the Moscow Summer Olympic Games. Craig has been a long-time supporter of Swim Across America since it began in 1987 and was co-founded by Darien, Connecticut, resident Matt Vossler in honor of his college roommate Jeff Keith who is a cancer survivor. Today, Craig works with Swim Across America as the vice president of Partnerships.

“We were so thrilled to be able to bring Craig and Elizabeth to the Darien YMCA to work with the Piranha swim team and help us kick-off the swim season for Swim Across America Fairfield County,” said Matt Vossler, co-founder of Swim Across America. “The big open water swim is scheduled for June 25th here in Fairfield County and everyone is excited and getting ready for the swim! It is such a gift for our local swim teams to get practice time in the water and to be able to learn some pointers from world class athletes like Craig and Elizabeth. The swim team members were really excited and honored to have the opportunity of dedicated time with these amazing swimmers.”

Swim Across America, Inc. (SAA) is celebrating 35 years of raising money and awareness for cancer research, prevention and treatment through swimming-related events. With the help of hundreds of volunteers nationwide and past and current Olympians, Swim Across America is helping find a cure for cancer through athleticism, community outreach and direct service. To learn more visit swimacrossamerica.org.