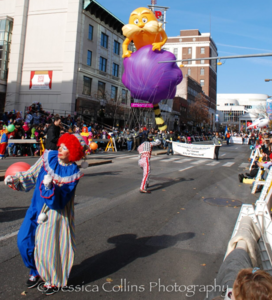 One year when I was small and my birthday was really on Thanksgiving, my mom took me to see the Macy’s Thanksgiving Day Parade. As we walked to the parade route, I saw the first balloon go by from afar. Down the street, between the buildings, I saw a giant balloon and it was more amazing that I ever imagined. TV didn’t do it justice. They are huge and that first balloon will always be one of my favorite Thanksgiving birthday memories. The parade was amazing, but that first balloon sighting was the best.

The Thanksgiving parade is still one of my favorite parts of the day (along with pie, obviously). I’ve been to many Thanksgiving parades since and even lived my dream of being a giant balloon handler in the Stamford parade a few years ago. Yes, I walked a giant dragon through the streets of Stamford!

As we get closer to Thanksgiving, here are a couple amazing Thanksgiving parade books. My first pick is Balloons Over Broadway: The True Story of the Puppeteer of Macy’s Parade by Melissa Sweet. I love this book (and the illustrations). Sweet introduces readers to the true story of Tony Sarg, who invented the giant balloons we see in the Thanksgiving Parade.

Another favorite Thanksgiving parade book is Milly and the Macy’s Parade by Shana Corey. While the characters and Mr. Macy’s involvement in starting the parade are fictious, it is based on the creation of the parade. Prior to reading this book, I didn’t know that Macy’s employees from other countries who were feeling homesick as the holidays approached brought traditions from their countries to the parade.

Both of these beautiful picture books based on the history of the parade are wonderful additions to your Thanksgiving traditions. Read the books then watch the parade (on tv or in person). Both stories bring even more magic to the Thanksgiving Parade.