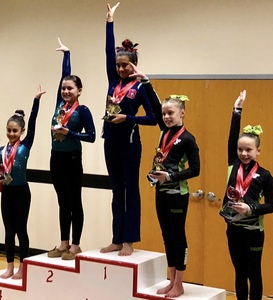 The Darien YMCA gymnastics team reaped the awards at the Lakewood-Trumbull YMCA Harvest Invitational.  The Level 4 squad won the team championship and four gymnasts won the All-Around (AA) title for their age group and level.

Ingrid Kerr paced the first place Level 4 team, winning the AA for the 11-13 age group with 36.15 and medalling on all events. Mia Macdonald was first on bars for Darien, seventh AA overall and also made the podium for vault and floor. Emma Bookless medalled on every event and tied teammate Shayna Moeller for eighth AA. Moeller also reaped medals on bars, beam and floor. Annelise Enters placed on floor, vault and bars while Tanner Shanley medalled on vault, beam and floor. Rhea Rai placed on floor where Kaia Woodman earned her meet high score.

Molly Zengo earned first on vault, floor and AA with 35.20 in the 8-10s group and also medalled on bars and beam.  Lily Royce made the podium on every event and was third AA. while Anna Rogers medalled on beam.

The third place Level 5 squad was led by Emily McKee, who captured first on vault, beam, floor and AA with 35.05 and placed third on bars in the 8-10 group. Penelope Arredondo took second on bars, beam and AA and was third on floor in the 11-12 group. Maddy McGivney was third on bars and fourth on beam while Sofia Geffner was fifth on bars and floor. In the 13-and-up group, Alex Decsi swung to fourth on bars.

Lauren Smith had four of a kind in the Level 6 age 10-12 group, placing third AA and on all events except floor where she earned fourth. Sommer Schmidt was the beam champ and took third on vault in the 14-15 group.