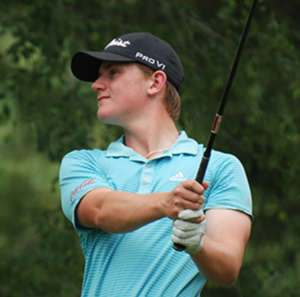 Doyle, who had reached the finals once before, as a 15-year-old in 2018 against eventual winner Connor Belcastro, made four birdies in today’s round, including one on the opening par-5 that set him ahead early. Doyle led by one hole after nine, increased it to two with a par against St. Pierre’s bogey at the par-4 11th, and then maintained the lead until the 17th when the match ended. Doyle and St. Pierre traded birdies on the par-3 14th hole and par-5 16th holes. But Doyle, who had last week won the Connecticut Junior PGA Championship at Keney Park, made only one bogey all day, and none on the back nine.

To reach the final, Doyle, 17, defeated friend Alex Gu of Darien in the semi-finals, and survived a 21-hole match against  No. 21 seed Bradley Sawka of Ellington Ridge Country Club in the round of 16. Doyle was the No. 5 seed.

St. Pierre, 16, the 15th seed, defeated Hop Meadow’s Jack Bosworth in the semi-final in a match that went 20 holes, and eliminated two experienced (and more highly seeded) juniors on the way to that match: Michael Hanratty of Farmington Woods Golf Club (No. 2 seed)  in the round of 16, and Jackson Roman of Shuttle Meadow Country Club (No. 10 seed)  in the quarters. St. Pierre was a semi-finalist in 2019, losing to eventual champion Ben James.

Doyle receives the William A. Salvatore trophy, named after the Watertown native who won it three consecutive times from 1956-1958, something no Junior Amateur champion has ever done.

The Junior Amateur is conducted by the Connecticut State Golf Association. It comprises 18 holes of stroke play qualifying and three days of matches, culminating in the 18-hole final.