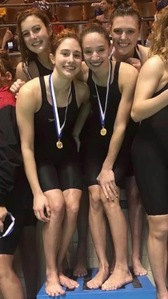 Lexi Punishill, Lily Bradbury, Natalia Ferranto and Kendall Luecke were honored with the title for the 200 Free Relay which they swam in a 1:36.72.  The fastest 100 athletes in the country as determined by their time in each event are named All-America.

This relay also was the state winning relay at State Swimming Open Championships at Yale University.