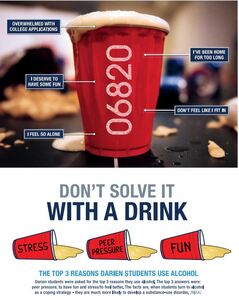 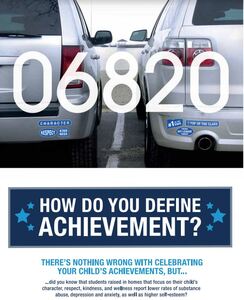 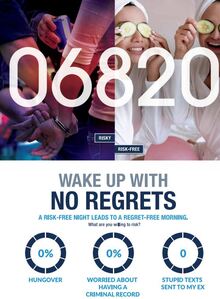 For the past four years, The Community Fund of Darien in collaboration with the Thriving Youth Task Force (TYTF) has educated Darien teens and adults about the dangers of teen binge drinking through the “Our Darien” social marketing campaign. This public health initiative aims to shine a spotlight on the impact of alcohol on the teen brain and to offer proven tactics towards healthier attitudes and behaviors.

A growing body of research shows an ongoing parent-child dialogue about risky behaviors, combined with clear rules and consequences, equips students to make healthy choices in the short and long term.

The “Our Darien” campaign, funded by a grant from the state of Connecticut’s Department of Mental Health and Addiction Services (DMHAS) will launch on October 16th.  This final year builds on previous campaigns to deliver three key messages:

Let’s Explore Why Teens are Drinking

TYTF’s most recent student survey, which examines the correlations between developmental assets and risky behavior, found that 48% of Darien High School students stated they do not have the coping skills to respond to disappointment, frustration or other experiences of discomfort.  In 2017, recovering addict and motivational speaker Chris Herren encouraged Darien students and parents to consider the “why?” in addition to the “what?” “where?” and “how?” questions regarding students’ access to alcohol. Dr. Suniya Luthar, who has studied substance abuse and mental health among teens in affluent communities for decades, explained at a recent Depot/DHSPA-sponsored event that there is increasing evidence that substance use occurring in the context of suburban affluence seems to be most clearly associated with psychological factors, like “managing negative emotions.”  Luthar’s work clearly links teens’ substance use and their experience of depression and anxiety.  The “Our Darien” campaign continues the conversation about why our teens turn to alcohol and how, as a community, we can encourage less destructive choices.

The Joy of Missing Out

High school students from The Community Fund of Darien’s Youth Asset Team collaborated with Colangelo, the local marketing firm that develops the “Our Darien” campaign, to craft a clear message for teens about the “joy of missing out.” Their re-frame? What if you’re “missing out” on a night of running from the police? Or “missing out” on your name getting added to a “no longer accepted list” at the college of your choice? What if you “missed out” on waking up with a pounding headache and several text messages that you completely regret? What if instead you engaged in authentic connection with friends and self-care that re-energized you? Darien students thought their peers needed a vision of how to practice self-care at home with friends rather than using alcohol to “relax” after a stressful week. The new “Our Darien” campaign materials reflect this important message.

A Message for Parents: How can you be part of the solution?

Students raised in homes that focus on their child’s character, respect, kindness and wellness report lower rates of substance abuse, depression and anxiety, as well as higher self-esteem according to Dr. Suniya Luthar’s research. Dr. Rob Turrisi, who has spent decades studying college students’ drinking patterns and the impact of students’ parents on their alcohol consumption, spoke to Darien parents last year about his research showing that the children whose parents engage then in an ongoing conversation about alcohol are less likely to consume alcohol and to consume it heavily in their college years. His research also revealed that teens whose parents model heavy drinking and allow them to drink are four times as likely to be in the 20% of college students causing over half of the on-campus problems.  The “Our Darien” campaign encourages parents to help by re-examining household attitudes, rules and behaviors about alcohol.

The Community Fund of Darien and the Thriving Youth Task Force are committed to turning the teen binge drinking trend around and giving parents and students the information and resources they need to make an informed decision about underage drinking.  In the coming weeks, residents will see social media messages about these themes as well as posters and postcards around town and in the mailbox. Let’s work together to keep our teens safe and healthy. For more information please visit ourdarien.com

The Thriving Youth Task Force, which is convened by The Community Fund of Darien, was created in 2008.  The TYTF brings together leadership from the town, the public schools, parent organizations and social service organizations that work with youth and parents to identify issues affecting the youth of Darien and to develop strategies and programs to promote and empower positive youth development.  Every three years, the TYTF surveys Darien 7-12th grade students about their developmental assets (the building blocks of healthy development) and their involvement with risky behavior, presenting results to parents and the town.  The TYTF members have provided insight and guidance for The Community Fund’s nationally recognized “06820” campaign to reduce binge drinking among adolescents in Darien.  More information can be found at www.communityfunddarien.org.