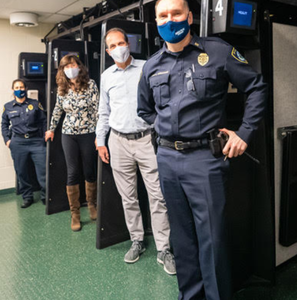 Said The Darien Foundation’s Executive Director, Sarah Woodberry: “This grant was fortuitous and conceived of during a popular ‘Coffee with a Cop’ gathering with Lt. Alison Hudyma. (Prior to the pandemic, the Darien Police Department would have monthly gatherings at different local spots for coffee and conversations with residents.) It was during this meeting that Lt. Hudyma shared some ideas for bringing new technology that would expand and improve upon the Darien Police Department’s existing capabilities.”

From there, the dialogue lead to meetings with the Police Department and The Darien Foundation Board of Directors Technology Chair Sean Calvillo, who was instrumental in consulting and advising on the grants. He met with the Darien Police Department to assess their technology and also attended demonstrations to help assess and implement the new systems. The DPD was then invited to The Darien Foundation Board Meeting to make a grant request, which was unanimously approved.

The first grant, totaling $55,000 from The Darien Foundation, enabled the police to purchase a FARO 3D laser scanner. This portable device creates a robust, to scale scan of an accident or crime scene within an hour or less. (Larger scenes like schools or buildings take several hours.)

The FARO scanner will be used to “map” all seven public schools, as well as public facilities. This will aid the police in the event of a critical incident, such as an active shooter or a natural disaster, enabling them to respond with accuracy and precision.

Lt Alison Hudyma, the first female lieutenant and a 20-year veteran of the DPD, is in charge of the five-person Accident Investigation Team, and was integral to the grant process. She said: “In case of any active shooter incident -- with this new technology, we will be prepared. Our team is using the FARO to create a very precise plan of each school and building so that we will know exactly how the exits, corridors, and rooms are laid out.”

Chief Donald B. Anderson said: “The FARO will dramatically change how prepared we can be for a critical incident. We will know the exact plan of each public building and school so that we can pinpoint and address any emergency situation that may arise – be it an active shooter, a weather -related or other natural disaster, and/or any another unforeseen threat or danger.”

To do this, the FARO will be used to create a scalable 3-dimensional model of each Darien public school. Accident team officers will scan the building and download the information in order to create these 3D images to share with the department and town officials. These models will show each building’s precise measurements between entrances and exits, doors, stairwells, and staircases in order to form a plan of action in the event of an emergency. The AIT (Accident Investigation Team) is currently mapping Town Hall. The DPD will use the 3D scans to practice their various responses to an emergency, i.e. by reviewing the location of a threat, securing the perimeter, and setting up a command center.

Beyond being prepared for a critical incident, FARO will also help the police with traffic accident scenes. Said Hudyma: “We used to take static shots of a scene, and it could take hours. Now, with the FARO, we can acquire incredible data at the scene of an accident or incident in half the time, and with much more precision.” Added Sgt. Derek Mulcahy, “When there is an accident, people don’t realize that it is a very math-intensive process. The FARO actually spins around and takes measurements that would normally take us hours to calculate and measure with a normal camera.” This aspect of the FARO will cut back on traffic associated with road closures, and save the police time when there is an accident.

The second grant, totaling $56,000, enabled the department to purchase a live-fire judgement training, and decision-making Laser Shot system.  Laser Shot provides high-quality, scenario-based interactive training for officers. At a time when gun violence and tensions have risen across the U.S., this is a significant area of focus for law enforcement employees – even in a “quieter” town such as Darien.

Using Laser Shot, the training team can present officers with realistic, high-stress scenarios at the indoor firing range, or in other flexible spaces. The scenarios are played out on a large screen via life-size projections so that officers can rehearse how they would react when presented with various situations.

For example, in one simulation, an officer is faced with a virtual scenario on the screen that involves a suspect who is reaching for something. The officer must then react to what the suspect pulls out (ranging from either a non-threatening item such as a cell phone, or baby bottle -- to a knife or a gun) and assess and handle it as if it were a real situation. The technology offers 800+ different scenarios, all with different endings, depending upon the actions chosen by the officers in training.

Said Captain Shreders: “The goal is always to de-escalate encounters and minimize the use of force by “practicing” how officers will react in stressful situations. While violent encounters are lower frequency occurrences, the DPD places a high degree of importance upon training for these circumstances.”

He continued: “We take the use of firearms and deadly force with the utmost of seriousness. You would be surprised as to how often our officers are faced with incidents that require the use of judgement and decision-making. Many of these situations actually occur during routine traffic stops. Our prior system was outdated and did not offer such a wide variety of scenarios, nor the amount of possible different outcomes as the new Laser Shot system. Now, all 51 officers will be trained with the new system.”

Said Captain Jeremiah Marron, Jr: “The Darien Police Department has always recognized the importance of preparation for critical incidents. We take pride in being one of the most highly trained, educated, and professional police departments, not only in Connecticut, but in the entire country. Those we serve deserve this. We are sincerely appreciative to be able to benefit from partnering with The Darien Foundation. Once again, the generosity of this organization and its donors has seen to it that our officers will receive the best training available, pertaining to certain types of critical incidents. Another clear example of community support -- and for that we are very thankful.”

Calvillo said: “It has been incredible to work with the DPD on this new technology. I know this will help our outstanding officers on so many levels – from training, to efficiency to overall preparedness.”

Commissioner Brent Hayes added: “The Darien Foundation has been a long-time supporter of the Darien Police Department. We are incredibly thankful for this generous grant of $111,000 which will provide our officers with state-of-the-art technology, and training to best serve our community.”

The Darien Police Department is comprised of 51 sworn officers, 18 traffic agents, 12 civilian employees and is headquartered at 25 Hecker Avenue in Darien, CT. The Department maintains a fleet of 30 vehicles which includes 13 marked patrol units, a motorcycle, a 27-foot SAFE Boat, a special services vehicle, undercover vehicles and administrative vehicles. The Department acts as the Public Safety Answering Point for all 911 and non-emergency Police, Fire and medical-related calls within the Town of Darien, CT.

For more information about the DPD, visit: darienpolice.org

For more information about The Darien Foundation, visit darienfoundation.org