87th Connecticut Open heads to the Country Club of Darien 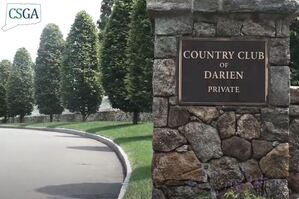 A deep field filled with past champions and annual contenders is ready to compete at the 87th Connecticut Open presented by The Reby Financial Advisory Teams of Wealth Enhancement Group from July 26-28th at the Country Club of Darien.

The field of 144 will be highlighted by the return of defending champion Max Theodorakis. Last year Theodorakis pulled away on the final day at his home club, Ridgefield Country Club, to capture his first professional victory. Since his victory Theodorakis has had a number of good finishes in mini-tour events and recently he finished one shot out of a playoff at the Massachusetts Open.

“I’m preparing for this year’s Connecticut Open just like any other tournament,” Theodorakis said. “It’s the first professional tournament that I’ll be defending, so that will be a new approach to it but definitely looking forward to it.”

“I am excited to get back and play at the Connecticut Open,” Rasmey Kong said of his return to the event. “The Connecticut Open means a lot to me since it was my first professional win and it is a tournament I always looked forward to playing every year growing up.”

Tee Times
A strong test awaits the field when they arrive at first time Connecticut Open host the CC of Darien. Opened in 1957 as an Alfred Horace Tull design the course was long considered, “a nice little layout.” Eventually, the membership decided they wanted more out of their course, and in 2005 they hired Dr. Michael Hurdzan to update it. Hurdzan, the architect of 2017 U.S. Open host Erin Hills Golf Course, turned a nice course into a layout worthy of any championship.

Work began in 2007 and hardly a blade of grass or a spec of sand was left unturned. When the redesign was done the sides had been flipped, all the tees and bunkers rebuilt, the par dropped from 72 to 71, holes were rerouted, ponds were added, and greens rebuilt.

Since the renovation was completed the Country Club of Darien has hosted a number of prestigious championships including the Westchester PGA, Westchester Open, and The IKE. The course is scheduled to host future major events as well welcoming the MET Open in 2022 and the Connecticut Amateur in 2023.

“We are honored to have the opportunity to host and showcase the CC of Darien to all of Connecticut at this historic championship,” says head professional Cory Muller who will also be playing in the tournament. “We believe the golf course will present a fair and challenging test for the players as well as provide an experience for the participants that they won’t soon forget.”

The par-71 layout will play at approximately 6,700 yards and features a challenging set of par-3s and a closing hole that has already proved that it can provide dramatic finishes.

Of the four par-3s, the 14th hole which will play at 190-195 yards for the tournament is the most picturesque. The downhill hole requires players to carry water at the front of the green before having to navigate a tricky green.

“The winner of the tournament will have managed the four par-3s the best,” says Muller. “If you can shoot even-par on those holes then it opens up scoring opportunities on the rest of the golf course.”

Two of the more demanding holes on the course are the par-4 7th and par-4 12th. On No. 7 the decision-making process begins the moment a player steps onto the tee. The options range anywhere from iron to driver and finding the fairway is crucial. With their second shot players will have to navigate water surrounding the green and a three-level putting surface that doesn’t offer much room for error.

On the dogleg left 12th long hitters have the advantage because they can carry the bunker complex 270 yards from the tee but that doesn’t eliminate the challenges offered by the multilevel green with water in play.

Some of the better opportunities for birdie come on the par-4 8th and par-5 18th. The 8th hole can be set up as a drivable par-4 while the closing hole is reachable in two setting the stage for some late round drama. In the past, the hole has provided just that including a walk-off eagle at last year's IKE.

“I have played the CC of Darien a lot in the past,” said Theodorakis. “It’s a really good course and it is always in great shape. I am really looking forward to playing the Connecticut Open there.”

Play at the 87th Connecticut Open presented by The Reby Financial Advisory Teams of Wealth Enhancement Group will begin on Monday morning at 7:30 a.m. with the second round to follow on Tuesday. Ahead of Wednesday’s final round, the field will be cut to the top-40 and ties. Fans are welcome at the event and admission is free.

Peter Ballo – In May Ballo played in the PGA Championship at the Ocean Course on Kiawah Island. Last year Ballo finished as the runner-up at the Connecticut Open.

Mike Ballo Jr. - The 2019 Met PGA New York State Open winner at Bethpage Black has made a run at the Connecticut Open on numerous occasions but has never hoisted the trophy. In 2018 he finished T4 while in 2016 he was T2.

Jeff Curl - A two-time Connecticut Open winner Curl captured the title in 2007 and 2013. In 2013 he survived a four-way playoff to win the title. Curl has played on the PGA Tour and is the son of longtime PGA Tour player, Rod Curl.

Eric Dietrich – A former star for the UConn Huskies, Dietrich played in the 2019 U.S. Open at Pebble Beach and last year was a major part of the story at the Connecticut Open before fading in the final round.

Rick Dowling (a) – Earlier this year Dowling nearly defended his Russell C. Palmer Cup title from a year ago before fading down the stretch. Dowling is a two-time Connecticut Amateur winner.

Bobby Gage – A long-time professional Gage has spent seasons on the PGA Tour, Korn Ferry Tour, and Champions Tour. Gage finished 32nd at the U.S. Senior Open in 2018. He made a late run at the Connecticut Open last year before settling for a T5 finish.

Ben James (a) – The University of Virginia commit is one of the top junior players in the country. Currently ranked fourth in the Rolex AJGA Rankings James has two wins this season capturing the Scott Robertson Memorial and the Team TaylorMade Invitational. James is also in a good position to make the Junior Ryder Cup team, sitting in a tie for first place in the points standings.

Rasmey Kong – The 2019 champion didn’t get a chance to defend his title in 2020 but he is back this year looking for a second title in the event.

Blake Morris - A former star at the University of Mississippi Morris is always in the mix at the Connecticut Open placing in the top-five each of the last four years. In 2019 he played in the PGA Tour's RSM Classic and in 2014 he won the Russell C. Palmer Cup.

Cory Muller - The ninth-year head professional at the Country Club of Darien Muller qualified for this year's Connecticut Open at the Madison Country Club Qualifier.

Cody Paladino (a) – The 2015 Connecticut Open winner nearly won the Connecticut Amateur earlier this year only to finish as the runner-up for a second consecutive year.

Adam Rainaud - The head professional at the Country Club of New Canaan Rainaud was the winner of the 2016 Connecticut Open at Woodway Country Club.

Max Theodorakis – Last year playing on his home course Ridgewood Country Club, Theodorakis won the Connecticut Open for his first professional victory. This year he looks to defend on another course that he is very familiar with.

Chris Wiatr – The former UConn standout made his PGA Tour debut this year at the Corales Puntacana Resort & Club Championship.