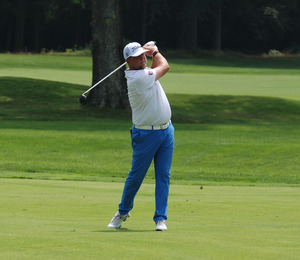 Darien, Connecticut (July 26, 2021) – Peter Ballo stood in the middle of the par-5 18th fairway 273 yards from a back right pin contemplating what his play would be. After a few moments and a brief discussion with his caddy, he pulled out his three-wood and launched his second shot high into the air. As the ball plummeted towards the green Ballo kept a close eye on the ball as it dropped to the putting surface 30-feet left of the cup.

The stellar approach led to Ballo’s sixth birdie of the day and a flawless 6-under 65 that put him atop the leaderboard by one after the first round of the 87th Connecticut Open presented by The Reby Financial Advisory Teams of Wealth Enhancement Group at the Country Club of Darien.

“[Today] was a lot of fun,” said Ballo last year’s Connecticut Open runner-up. “I drove it really well. That is kind of the big thing here with how long the rough is, you need to keep it in the fairway and luckily I pretty much did.”

Playing in the morning wave Ballo, the assistant professional at Silvermine GC, began his round with two pars before rolling in his first birdie of the day on the par-4 3rd. A few holes later on the difficult par-4 7th he converted a hard breaking left to righter for his second birdie of the round and from that moment on he knew it was going to be a good day with the flat stick. “I putted awesome today,” Ballo said of his putting performance on the tricky CC of Darien greens.

Just over two months removed from playing in the PGA Championship Ballo birdied the 9th and then added two more birdies on the 13th and 15th holes setting up his closing birdie.

“It makes it a little easier to be out in front,” said Ballo when asked if he minds playing with the lead. “It is always nice to be on top, I think there is a little bit more of a comfort level at least for me.”

Results I Photo Gallery
Ballo will be chased during Tuesday’s second round by a pair of amateurs, Ben Carpenter and Jackson Roman. Both players were part of the afternoon wave and fired 5-under 66’s to put themselves in a tie for second place.

Carpenter, playing on his home course, started his round on the back nine and came out of the gates hot birdieing three of his first six holes to turn in 3-under. The rising sophomore on the Yale golf team did stumble with a bogey on the par-3 2nd but that was a mere blimp on the radar as he birdied Nos. 2, 6, and 7 on the way to the house.

His highlight birdie came on the par-4 6th. His drive found the fairway bunker leaving Carpenter 131 yards from the pin. Carpenter opting for his 52-degree wedge, hoisted the ball over the lip of the bunker, landing it 10 feet behind the pin then watched as it spun back to gimme range.

After his round Carpenter talked about getting to play in a major event on his home course, “This is a great treat, I am glad to play it.” One year ago Carpenter played in another big event at his home course competing in the Metropolitan Golf Association’s IKE where he finished in third place.

Roman, fresh off a run to the Round of 64 at the U.S. Junior Amateur, played a nearly flawless round carding six birdies and just one bogey.

“I was lucky enough to play at the U.S. Junior Amateur and getting a chance to play on those courses, they might have been the toughest courses I have ever played on for a tournament,” said Roman. “After playing those courses golf just gets easier because it isn’t going to get much harder than that.”

On Monday Jackson (Shuttle Meadow CC) certainly made it look easy. Following pars on the first three holes he played Nos. 4-15 in 5-under, to jump up the leaderboard. Looking to post a number Jackson slipped up on the penultimate hole before finishing in a flurry. Standing 115 yards out on the closing par-5 the 18-year-old knocked his third shot to five feet setting up a birdie to cap his round.

“The birdie on the 18th was probably my most important birdie [of the day] because after the bogey on No. 17 it was really good to get right back to where I was before,” Jackson said of his finish.

Mike Ballo Jr. (Stamford, CT), the older brother of Peter Ballo, will begin the second round in fourth place at 4-under while Eric Dietrich (Farms CC) and two-time defending Connecticut Amateur champion Chris Fosdick (Wallingford CC) are tied for fifth at 3-under.

The 87th Connecticut Open will continue on Tuesday morning with the second round beginning at 7:30 a.m. Following the completion of play tomorrow the field will be cut to the top-40 and ties ahead of Wednesday’s final round.