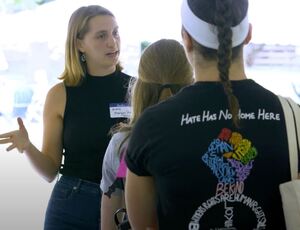 Early this summer, Darien resident and Hamilton College senior Avery Morgan began to strategize with her fellow sustainability coordinators about how to connect students and faculty who are concerned about sustainability, climate change, and climate justice. The result was a Sustainability Fair held on Sept. 9. Morgan is an environmental studies major at Hamilton.

Avery Morgan is a graduate of Darien High School.

The coordinators envisioned the fair as a catalyst for further campus conversation and action this academic year and beyond. They'd like to see it become an annual event. At the heart of the event was a panel discussion that included representatives from other student organizations, faculty, and the Hamilton sustainability coordinators.

By holding the fair early in the semester, organizers aimed to introduce new students to the many opportunities for sustainability activism on campus said Morgan, who moderated the panel discussion.

"I think one of the things we were most excited about is just trying to show that there's a lot of opportunity to do these types of things at Hamilton and as long as you're connected with the right people, you can get those resources, and you can look at the things that you're passionate about," she said.

At one point during the discussion, an estimated 60 people gathered under a canopy on Dunham Green to hear panelists take on questions: Why are young adults and college students so important for the climate justice movement? Do you see a connection between climate justice and other issues students are raising on campus? Has Hamilton's climate action community been inclusive, and what actions can be taken or are being taken to make it more inclusive?

When the panel concluded, audience members joined small, informal groups to talk about issues such as climate change and social justice and emissions and climate action.

Originally founded in 1793 as the Hamilton-Oneida Academy, Hamilton College offers an open curriculum that gives students the freedom to shape their own liberal arts education within a research- and writing-intensive framework. Hamilton enrolls 1,850 students from 49 states and 46 countries. Additional information about the college can be found at www.hamilton.edu.