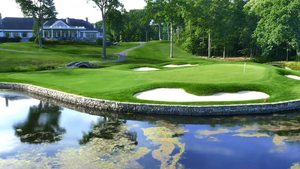 Featuring both a boys and girls division the 53rd playing of the Borck Junior will begin on Monday with 18 holes of stroke play qualifying. Following the completion of play on Monday the top 16 boys and top eight girls will advance to match play slated to begin on Tuesday. Day two will begin with the boy's Round of 16 in the morning followed by the quarterfinals for both divisions in the afternoon. The final day of play will feature semifinal matches in the morning and championship matches in the afternoon.

Ahead of this year’s championship we had a chance to catch up with 2021 Borck Junior Girls Division winner Mia Holbrook. Last year Holbrook won on her home course, Silver Spring Country Club.

CSGA: Have you ever defended a title before?

Mia Holbrook: Last year, I defended my women’s club championship title at Silver Spring CC, which is also a match play tournament. There were a lot of expectations for me to win which definitely added pressure when playing those matches. Dealing with the pressure of defending that title will be helpful as it will help me deal with the pressure and expectations that come with defending the Borck title.

CSGA: What are you most excited about when it comes to defending your Borck title?

MH: I’m excited to defend my title because I have been playing fairly well this summer and would like to continue to do so and winning this tournament would be the icing on the cake. I love the format of the Borck tournament and I like that it is a junior only tournament. It would be really cool to be a two-time Borck champion.

CSGA: What is your best memory from your Borck win last year?

MH: The best memory I have from the Borck last year was winning my semifinal match in extra holes. I won on the 21st hole by putting my tee shot to about six inches on the third hole at Silver Spring CC. That was such an amazing way to win my match, and it gave me a lot of confidence going into my championship match.

CSGA: What is it about match play that allows you to be so successful?

MH: I find match play to be less stressful than stroke play where one bad hole can ruin your score. I can just relax and play my game. I love the strategy that is involved in match play around when to be aggressive and when to hold back. My caddie, Carl Klein, was also instrumental last year in this regard.

CSGA: What are the strengths of your game?

MH: The best part of my game right now is my iron play and recovery shots. These aspects of my game have greatly improved from last year, and have helped lower my scores.

CSGA: You are heading into your senior year of high school. What are your golf goals moving forward?

MH: My goals for golf this coming year are to hopefully gain admission to a great college and also play golf there. I also really hope for our high school varsity team to make it to our section final tournament and for me to individually qualify for our state championship tournament.