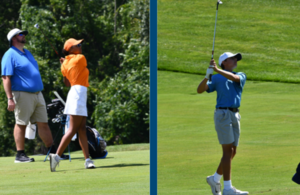 Among the four remaining in the Girls Division is defending champion Mia Holbrook (Silver Spring CC) who won her quarterfinal match 5&4 over Paige McKenna (Tashua Knolls GC). After the two traded victories early in the match Holbrook won the fifth hole and never looked back as she extended her lead to 2 up with a victory on No. 8 and then won Nos. 11 and 12 to put the match away.

In the semifinals Holbrook will face Laniah Moffett (EClub of Connecticut) who bested top seed and medalist Kenna Roman (Shuttle Meadow CC). The Crosby High School junior trailed early in the match but tied it on the fifth hole and then took a lead she would never relinquish when she won Nos. 7 and 8 in succession.

“At first it was just getting to the greens,” Moffett said of her round. “Once I get to the greens I can two-putt to win or tie. At first, the putting wasn’t there but I was still hitting greens in regulation which was really all I needed.”

Leading 2 up Moffett all but clinched the match with a birdie on the par-4 13th. “I didn’t expect any birdies because the greens are so hard.” With a comfortable lead in hand Moffett was able to close out the tilt 3&2.

The second semifinal will feature Kate Hong (Greenwich CC) and Isabella Hassan (Rolling Hills CC). Hong played her way into the final four with a commanding 6&5 win over Sadie Lee (Tashua Knolls GC). Powered by a birdie on the opening hole Hong raced out to a 4 up advantage at the turn and led 6 up by the time the match headed for the 12th tee.

“I feel like you can be more aggressive [in match play] because if you have a bad hole it is okay,” said Hong who is set to begin her career on the Holy Cross golf team in the coming weeks. “It is a lot easier to put a bad hole behind you and move past it because it isn’t like it will affect your score.”

Hong’s opponent Isabella Hassan advanced to the semifinals with a 3&1 win over Meredith Norton (Rockledge CC). With the match tied through seven holes, Hassan captured Nos. 8, 9, and 10 to in a blink take a 3 up lead. Norton tried to rally winning Nos. 11 and 12 to trim the lead to 1 up but victories by Hassan on Nos. 15 and 17 sealed the deal.

In the first Boys Division semifinal Charles Schrohe (Burning Tree CC) will square off against Cameron Besaw (EClub of Connecticut).

Schrohe pulled off the upset of the day defeating Connor Goode, the medalist and incoming UConn freshman, 2&1 in the quarterfinals. Goode (Glastonbury Hills CC) struck first however Schrohe hung tough and with four holes remaining the match was tied. With the match up for grabs, Schrohe birdied the par-4 15th to take a 1 up lead and then extended his advantage with a victory on the ensuing hole. Now dormie in the match Schrohe, a 1 up winner over Cody Brew (Tumble Brook CC) in the Round of 16, tied the par-4 17th to emerge as the 2&1 victor.

His opponent Cameron Besaw needed extra holes to defeat Andrew Flynn in his quarterfinal match. Early in the match Flynn (Patterson Club) held a 3 up advantage only to watch as Besaw methodically chipped away until he tied the match on the par-4 14th. Besaw then briefly took the lead with a birdie on No. 15 before Flynn squared the match with a birdie of his own on No. 17. After the par-4 closing hole was tied with pars play proceeded to the par-4 first where Besaw closed the door on the match with a birdie. Besaw also went the distance in the Round of 16 defeating Hudson Hagmann (Connecticut Golf Club) 1 up.

The second semifinal will feature Andrew Beauton (Pine Orchard CC) and Robby Rosati (Great River GC). Beauton, a 4&3 winner against Will Lord (Suffield CC) to begin his day, had to hold off a late rally in the quarterfinals.

Leading Colin Firda (CC of Waterbury) 3 up after 11 holes Beauton held on down the stretch as Firda won Nos. 16 and 17 to tighten the match. However, matching pars on the final hole saw Beauton close out the match 1 up.

“It was mostly just hitting greens in regulation and keeping the ball in play,” Beauton the 2022 CIAC State Open winner said of his day. “I want to continue to hit greens tomorrow and make a lot more putts. I had a lot that came close but they weren’t really dropping.”

His opponent Robby Rosati began his day with a 2 up win over Daniel Casanta (Ridgewood CC) and followed it up with a 5&4 victory in the quarterfinals against Fritz Smith (The Stanwich Club). In the quarterfinal match Rosati took the lead with a birdie on the par-5 fifth hole and then slowly extended his advantage. By the turn, he led 2 up and then he pulled away down the stretch winning three of the last four holes to punch his ticket into the next round.