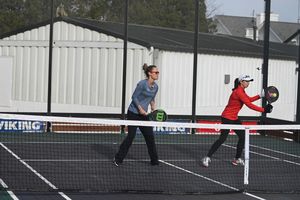 Coming to Fairfield and Westchester Counties

Pittsburgh, Pa.  – (February 25, 2020) - The country’s top platform tennis players will storm Fairfield and Westchester counties, March 5 through 8, 2020, for the American Platform Tennis Association (APTA) National Championships, now in its 85th year.  Drawing as many as 500 men and women competitors from the local region to as far as Colorado and California, the tournament will take place at host club, the Country Club of Darien, 300 Mansfield Avenue, and at more than 34 additional clubs and facilities in Connecticut towns, such as Greenwich, New Canaan, Wilton, Weston, Fairfield and in Rye in Westchester County. Spectators are welcome at no charge.

The tournament will feature the sport’s doubles format requiring teamwork, racquet skills and athleticism by top ranked competitors such as four-time men’s national champion Mark Parsons, racquets director at the Aspetuck Valley Country Club in Weston, who won the event last year with his partner Juan Arraya, director of racquets at Greenwich Country Club. The men’s draw will be particularly challenging this year now that former top tennis professionals are in the mix, such as former Rowayton resident Jared Palmer, who held a No. 1 world ranking in doubles and is the winner of 28 doubles titles, including the 1995 Australian Open and 2001 Wimbledon, and Greenwich resident Eric Butorac, winner of 18 doubles titles during his 14-year professional tennis career. Butorac, who works with the USTA, is partnering with Aman Singh, director of racquets at the Milbrook Club in Greenwich.

On Thursday, March 5th, the APTA will also hold the Men’s and Women’s Viking President’s Cup, an annual inter-regional competition. Members of teams in each of the APTA’s seven regions play in qualifying tournaments to earn enough points to be selected to represent their region in this event.

“We are excited to bring the APTA National Championships and the Viking President’s Cup back to Fairfield and Westchester counties,” said Tiernan Cavanna, president of the APTA, Nationals Co-Chair and a Darien resident. “Fans will be treated to an outstanding show of talent from the best in the sport.” The last time these national competitions took place in the region was 2016.  For those at home who want to keep abreast of the action, there will be live Internet broadcasts and regular updates via platformtennis.org.

Founded in 1928 in Scarsdale, N.Y., platform tennis or paddle as it is commonly called, has been growing rapidly.  The APTA’s mission is to increase participation in the sport among all levels of players across the country. Now played in over 41 states, platform tennis is the only racquet sport that players can enjoy outdoors in cold weather. The sport provides a way for both adults and juniors to keep fit in the winter and because of its doubles format, it is also a social game.