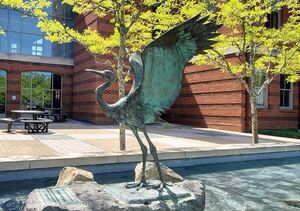 Darien Library is proud to announce that they won two awards in the Connecticut Library Association’s 2021 Publicity Awards. Krishna Grady, Head of Youth Services, and Amanda L. Goodman, Head of User Experience, won in the category of Electronic for the Connected Community videos. Goodman also won in the Designer’s Award category for the Women’s History Month/Women’s Suffrage Display. The Library has previously won other publicity awards at the state-level library publicity contest and nationally, as well.

“To help us stay connected during these times, Darien Library presents ‘Connected Community’ — fun videos made by you and your neighbors.” When Darien Library’s building closed in March 2020, library staff wanted to find a way to help people still feel like they were part of a community while sheltering in their homes. The tutorial videos (darienlibrary.org/connected-community) allowed people to share their best do-it-yourself skills in a way that was fun and accessible. The videos covered topics from how to cook, play a card game, sew a mask, and make children’s toys. Among the contributors was caterer Carolyn Eddie of Carolyn’s Absolutely Fabulous Events.

2020 marked the 100th anniversary of women gaining suffrage in the United States. To celebrate this momentous occasion, Darien Library created a display that chronicled the history of American women’s suffrage from 1776 to 1965.