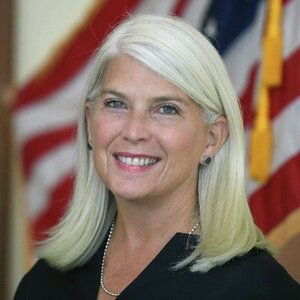 (Darien, CT) – The Campaign for Jayme Stevenson for US Congress confirmed that Jayme Stevenson is the Republican candidate for Connecticut’s Fourth Congressional District to oppose Jim Himes in the general election on Tuesday, November 8, 2022.  Results from the Primary Election indicated voters decisively chose Stevenson with 65% of the votes.

“We are deeply grateful to the many supporters and local officials that came forward to endorse Jayme Stevenson for Congress. Their voices were heard as they expressed their faith in Jayme as the superior choice as our next federal delegate.  Connecticut is suffering in every aspect that matters to residents and businesses and Jayme is paying attention, listening to each community, and ready to fight for us on all fronts. We have the momentum and are energized to help Jayme become our voice in Washington,” stated Stevenson’s Campaign.

“We’d like to thank Dr. Goldstein and his supporters for participating in  Connecticut’s Republican Primary. It is critical that we come together to ensure new leadership in November,” stated Campaign officials.

“Successful government leaders should draw from their personal values and professional experiences to truly understand, effectively advocate and take action for their constituents. People are longing for government that works to protect our safety and freedoms.

My opponent, Jim Himes, has been on the sidelines in Washington working hard for the Democrat party rather than working for the people he is supposed to represent in Connecticut.  We deserve better,” stated Jayme Stevenson.

“Global and national problems have found their way into the homes and lives of Connecticut residents – skyrocketing gas and food prices, crumbling infrastructure, escalating violent crimes, along with breakdowns and failures in mental health, in public safety, and in our schools.  In my 12 years of public service I have brought people together across the region and state to create solutions and build consensus on shared goals. As a municipal CEO, I worked to keep residents healthy, safe and to ensure a sustainable cost of living through responsible budgeting. I’m running for Congress to represent Connecticut with common sense, pragmatism, and an experienced steady voice in Washington.”