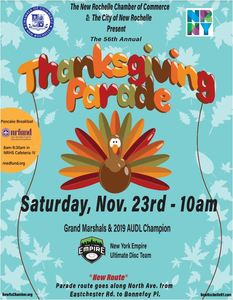 The Chamber of Commerce of New Rochelle is again partnering with the City of New Rochelle to host the 56th Annual Thanksgiving Parade on Saturday, Nov. 23rd. This year’s Grand Marshal is The New York Empire, the only professional sports team to call New Rochelle home and 2019 Champions of the American Ultimate Disc League (AUDL). The parade will kick off at 10 a.m. on North Avenue at Eastchester Road and proceed down North Avenue ending at Bonnefoy Place.

The New York Empire, owned by the Stevens Family and lead by head coach, Bryan Jones, finished their season with a victory against the Dallas Roughnecks (26-22), in August 2019. They not only won the championship title, but also became the third team in AUDL history to finish a season undefeated. The New York Empire has been a professional AUDL East Division team, having originated in Brooklyn before moving to New Rochelle’s Joseph F. Fosina field at Flowers “City” Park in 2018. They have been devoted to the community; especially the youth, ever since their arrival.

President of the Chamber, Robert Hayes, said, “When they first joined the Chamber I knew they had something special. They were fun, fresh and community focused. As Champions they helped contribute to what makes New Rochelle great. We aren’t just the Queen City on the Sound; we are a City of Champions!”

Barbara Stevens, owner of NY Empire said, “We could not have chosen a better place for the NY Empire to call home. We are thrilled to be a part of this community and cannot wait to get back on the field. It is our goal to represent NY and the City of New Rochelle with professionalism and to provide a fun, friendly, exciting experience. Ultimate is a great sport that anyone can play. Come out to support the team and join in the fun. Gooooo Empire!”

Noam Bramson, Mayor of New Rochelle, expressed how the parade contributes to the area by saying, “The Thanksgiving Parade is one of New Rochelle’s most beloved traditions, bringing thousands of friends and neighbors together in celebration of the season and our community. This year, we will have the added pleasure of recognizing the New York Empire, 2019 American Ultimate Disc League Champions, which has brought pride to countless fans both within and beyond New Rochelle.”

The parade will feature several big balloons including New Rochelle’s hometown hero, Mighty Mouse, sponsored by United Hebrew celebrating their 100th Anniversary. The balloons will be joined by marching bands playing throughout the parade, clowns, beauty princesses, superheroes, singers and marchers from Iona and Monroe Colleges, local schools, businesses and organizations.“Because the Parade is the 2nd largest parade for Thanksgiving in the state of New York outside of the Macy’s parade, we invite all of our surrounding communities to join us for this spectacular event!” stated Diamond Wollaston and Jennifer Lanser, of the Chamber of Commerce.

North Avenue is also located right off the New Rochelle stop at the New Rochelle Transit Center on the Metro-North New Haven Line and can easily be accessed from all areas. The parade ends near Main Street where you can enjoy lunch and more fun activities.

WHO: The general public is invited to line the streets of North Avenue to cheer on and celebrate the marchers. There will be several viewing stands along the Parade route.

DETAILS: The Grand Marshals, dignitaries, Board Members, parade committee and sponsors will participate in a photo-op and event Ribbon Cutting at 9:45 AM on North Avenue and Eastchester Road with the large balloons as a backdrop to officially kick off the parade at 10 AM. For more information visit www.newrochellechamber.org or www.newrochelleny.com

The parade will be preceded by the New Rochelle Fund for Educational Excellence’s Pancake Breakfast in the House IV cafeteria, starting at 8AM. For more information, visit www.nredfund.org.