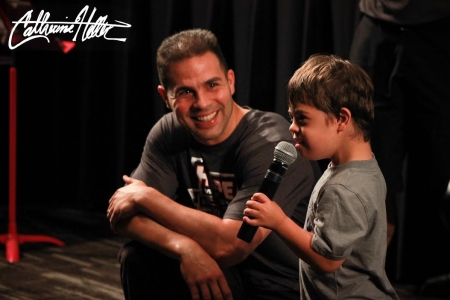 August 18th will from hereon be known as the day the Yankees came to Ridgefield!

The Professional Development meeting for Prospects and staff of The Prospector Theater turned upside down today. You can say the Theater was thrown a curveball by one of the greatest teams in US history - The New York Yankees.

The 57 million  adults living with some form of disability, eighty percent of whom are unemployed, are the reason the Yankees made their way to Ridgefield today. Supporting the mission of Valerie Jensen, founder of The Prospector Theater, Yankees players and staff embraced the Prospects and learned about their sparkle. They shared the importance of team work, giving the life your all, celebrating home runs and dusting yourself and getting back up when you are called out.

Created in 2009, the Yankees explain that HOPE Week (Helping Others Persevere & Excel) is based on the fundamental belief that acts of goodwill provide hope and encouragement to more than the recipient of the gesture.

During the week of August 17, the Yankees will reach out to a different individual, family or organization worthy of recognition and support. Each of these celebrations conclude at Yankee Stadium where the recipient(s) are greeted by the entire Yankees team.

As part of HOPE Week, the White House’s Corporation for National and Community Service will award honorees “President’s Volunteer Service Awards,” bestowed by representatives of the President to salute volunteers who strengthen the nation’s culture of service.